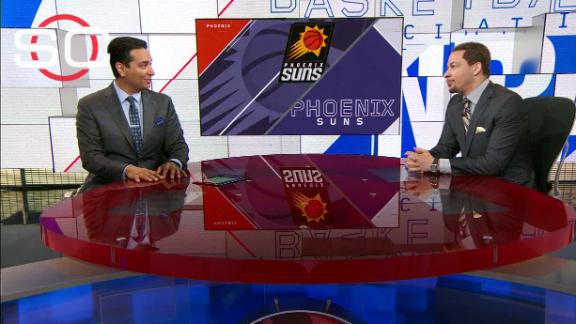 The Phoenix Suns, after a series of staff meetings Sunday, decided to shake up their coaching staff instead of ousting head coach and former veteran player Jeff Hornacek.

"It is never easy to make changes to a coaching staff in the middle of a season, but we feel Earl and Nate are ready to take the next steps in their careers and provide some creative ideas to our group," general manager Ryan McDonough said in a statement. "We thank Mike and Jerry for their contributions. They are both good coaches who made significant contributions to our team winning 87 games over the previous two seasons."

On Sunday, ESPN first reported that the Suns' 5-15 nosedive, including a home loss Saturday night to the 2-30 Philadelphia 76ers, had put Hornacek's job under immediate threat.

It is believed that the Suns are taking this measure instead to give Hornacek, who is held in high esteem by owner Robert Sarver, another chance to turn the club around.

But that figures to be difficult after the harsh news Sunday that star guard Eric Bledsoe is out indefinitely and will require surgery Tuesday to repair a torn meniscus in his left knee.

Sources told ESPN that the Suns, despite the organization's well-known fondness for Hornacek, have been forced to contemplate a coaching change far sooner than they hoped because of a slide that has dropped them to 12-20 and 11th in the Western Conference. There is also a growing fear within the organization that the team is no longer responding to its head coach.

Phoenix began the season with playoff aspirations after posting records of 48-34 and 39-43 in Hornacek's first two seasons, and after the offseason signing of center Tyson Chandler.

But the Suns have dropped 15 of 20 games since opening 7-5, seemingly bottoming out in Saturday night's home loss to the Sixers as Bledsoe also exited with his knee injury in the second quarter.

Adding to the sting of the Philadelphia loss: It was the first game on the Sixers' bench for former Suns coach Mike D'Antoni, who was hired recently by new Philadelphia chairman of basketball operations and former Suns owner Jerry Colangelo to serve as associate head coach to Sixers coach Brett Brown.

"Obviously, it's probably a low point for us," Hornacek told reporters after the game. "Now the confidence is lacking."

It was Philadelphia's first road win since last March, as well as the first game of a two-game suspension for Suns forward Markieff Morris, who threw a towel in Hornacek's direction after being pulled from a home loss Wednesday to 12-18Denver. Morris has been angling for a trade since the offseason.

"If something doesn't change quick, it could get really ugly, really fast."

This is the final guaranteed season on Hornacek's original four-year contract. Questions about his future with the club have been circulating in coaching circles since the Suns elected not to pick up their team option on Hornacek for 2016-17 entering this season.