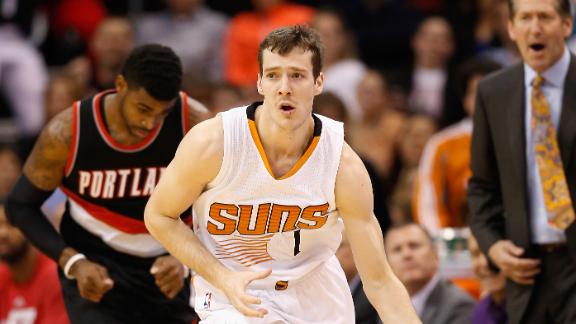 They were a perfect match in a move that was among the biggest on the busiest NBA trade deadline day in 25 years in which 39 players changed hands.

The Heat swung a deal to acquire Dragic -- a third-team All-NBA player last season -- from the Phoenix Suns on Thursday. Miami gave up four players and two draft picks to get Dragic, who told the Suns that he needed a change of scenery.

"We are incredibly pleased to take another step in getting the Miami Heat back to real championship prominence with the acquisition of Goran Dragic," Heat president Pat Riley said. "Goran is an All-NBA player, including the Most Improved Player last season, and we felt that once he became available, we would do all that we could to acquire him."

Dragic released a statement with a series of Tweets, capping them by saying he was "excited to bring the Dragon's fire to Miami!"

"Thank you to my fans, teammates and many friends in Phx!!" Dragic tweeted. "You are what made #cluborange a 2nd home for me and my family! The Sunsorganization has been good to me and I hope everyone knows I'd never say or do anything to purposely offend or minimize the success we'vehad."

"Although my recent words came out harsher than I'd intended, I did feel it was time to find a better fit for me as a bball player whoonly wants to be the best and help my team in every way," Dragic said. "I'm proud of my time in Phx & never want anything to take away from that or therelationship I've built and will continue to build in the community."

Heat guard Dwyane Wadealso wrote on Twitter, addressing the post to the Dragic brothers not long after the NBA signed off Thursday night on the terms of the deal that also included the New Orleans Pelicans.

The Heat have struggled this season, the team's first since LeBron James left after a four-year, four-trips-to-the-NBA Finals stay in Miami and returned to Cleveland.

But now, the Heat might be a team that could raise eyebrows in the Eastern Conference yet again.

Dragic had told the Suns that he wanted a trade to a better situation and an escape from Phoenix's point-guard logjam. And with him having the right to be a free agent this summer, the Suns knew their options were trade him and acquire something now or lose him without getting anything in return in July.

The Heat were more than happy to find out if they're the right fit.

Miami sent two first-round picks -- one that will be used in either 2017, 2018 or 2019, the other in 2021 -- to the Suns, who also get Danny Granger from the Heat. Also leaving Miami are guard Norris Cole, forward Shawne Williams and center Justin Hamilton, all headed to the Pelicans.

Williams is likely going to be waived by New Orleans. The Pelicans sent guard John Salmons to the Suns, who quickly announced they would be waiving the former University of Miami guard.

And with the Heat currently having two open roster spots, it's possible that Salmons might find himself in a Miami uniform again before long.

But getting Dragic -- averaging 16.2 points and 4.1 assists this season, down from 20.3 points and 5.9 assists a year ago -- alone was a coup for Riley, who has hopes of keeping the 28-year-old Slovenian guard long-term.

"Goran definitely helps Miami. ... Miami definitely got a steal with this one," said All-Star guard Kyle Lowry of the Toronto Raptors, speaking as a guest analyst on TNT as part of its NBA coverage Thursday night.

Cole was on Miami's 2012 and 2013 NBA title teams and went to the NBA Finals in each of his first three pro seasons.

He took to Twitter in the wake of the news.

Cole will get a chance for a more formal goodbye: New Orleans visits Miami on Saturday.

Cole will be a free agent this summer and wasn't expected to stay in Miami. Williams and Granger were both in their first year with the Heat -- with neither regularly playing significant minutes of late -- and Hamilton had become more expendable in recent weeks after the emergence of Hassan Whiteside in the center spot.

Miami starts its post-All-Star-break schedule in New York on Friday. The Heat are hanging on to the No. 8 spot in the Eastern Conference, part of a six-team group all bunched within two games for the final two spots on the current playoff bracket from that side of the league.

Information from The Associated Press and ESPN Stats & Information was included in this report.