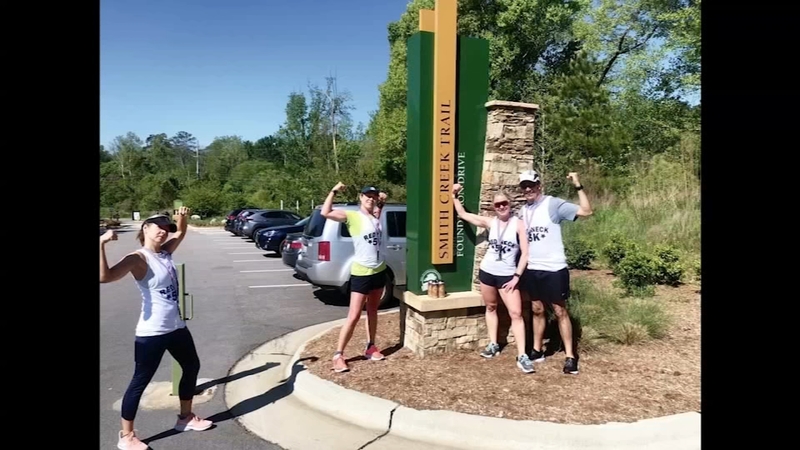 WAKE FOREST, N.C. (WTVD) -- Virtual races are helping athletes get their competitive fix. In the case of some supporters of a particular sporting goods store in Wake Forest, a secret virtual race is doing much more than that.

Run N Tri Outfitters is a special place for runners, bikers and hikers like Chris Coker.

"First time I walked in I thought I was on an episode of Cheers. Everybody was so friendly," he said.

John Goldfield agrees, "You walk in here they know what race you're training for or they remember what you did before."

To show some love for owner Bryan Staffey during the pandemic, Goldfield launched a virtual race. In lieu of a medal or a t-shirt, Goldfield would donate all of the money to the store.

"I put the idea out on a Facebook group site, excluding Bryan from the site so he wouldn't know what was going on and like everybody immediately said yes let's do it. Let's all run and support Bryan it will be totally fun."

Eighty-four people took part either running, walking or just donating. Rachel Zelibor did her part acting as secretary and in charge of the money collection.

"Just seeing post their pictures and how far they went was kind of really neat to see and just inspiring that we're all social distancing right now but we're all here for one goal and kind of virtually cheering each other on and stuff like that and at the end of the day we are all going to come together. "

The orchestrators took the $2,100 raised and surprised a guy who doesn't like surprises presenting it in Bryan's store.

"I was overwhelmed. Understanding how our shop runs. Focusing not on ourselves but on others. It was great to see how that philosophy had caught on to the community."

Instead of pocketing the funds, Staffey is using them to kick start a college scholarship in the name of Davion Davis. The 17-year-old lost his life in a drowning accident at Falls Lake in April. Davis was dating one of Staffey's daughters.

"I was trying to think of how I was going to fund that and this great gift came from the community so we'll be able to set up a scholarship in his memory."