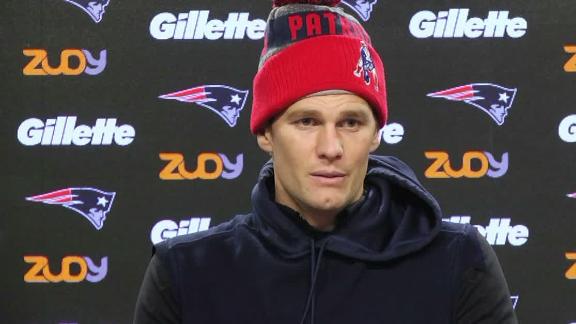 FOXBOROUGH, Mass. -- New England Patriots quarterback Tom Brady said that he isn't motivated to win Super Bowl LI as a form of retribution to NFL commissioner Roger Goodell for the Deflategate penalties Goodell handed down, which included a four-game suspension to open the 2016 season.

"I'm motivated for my teammates. They're all the motivation I need," Brady said Friday after the team's walkthrough practice. "It takes a lot of work to get to this point. Nothing that has happened in the past is going to help us win this game. What's going to help us win this game is going through that process we talked about and being ready to go. That's enough motivation for me."

Brady has fielded many questions about Deflategate during the course of the year, and explained why he often deflects them.

"I'm a positive person, so I just focus on all the positives. I don't get caught up in negativity and bashing other people," he said. "I'm very blessed. I get to do something I love to do -- show up to work every day, play football in the National Football League and play for the Patriots.

"I grew up watching Joe Montana and Steve Young in the Bay Area at a great time. I got great support from my family and some great support from my friends. I love playing for this team. I'm very blessed and I try to keep a positive outlook and I try to influence people in a positive way to try to be an encouraging person in other people's life. Hopefully that wears off on my teammates. It's a tough game and it's a lot of challenges you face. Always focusing on what's positive has worked for me."

On Wednesday, Goodell told Fox Sports Radio that it wouldn't be awkward if he had to hand the Lombardi Trophy to Brady, saying it would be an honor.

Super Bowl LI will be Brady's 34th career postseason game, which extends his own NFL record. He said he hasn't thought much about differences between this year and the first time he played in the game, in Super Bowl XXXVI against the then-St. Louis Rams, but is "very grateful" for the opportunity to play in his seventh Super Bowl.

"It's pretty cool for our team to be able to accomplish this," he said. "I think we've done a good job taking advantage of our opportunities. It's a pretty mentally and physically tough team that has proven itself over the course of a long season."

Brady not motivated by Goodell handing him trophy
Tom Brady denies having any extra motivation for the Super Bowl with the prospect that Roger Goodell would have to hand him the Lombardi Trophy and says his teammates are the only motivation he needs.
Related topics:
sportsespnroger goodellpatsnfldeflategatenew england patriotssuper bowl litom bradysuspension
Copyright © 2022 ESPN Internet Ventures. All rights reserved.
TOP STORIES
Police investigating two shootings in Cumberland County
Man accused of killing 9-year-old in Durham on trial in federal court
NC abortion legal battle looms amid standoff between AG and GOP
Migrants in search of a better life continue to die on their journeys
Why you should pay down your credit cards right now
R. Kelly due in court for sex abuse sentencing in NYC
FDA advisers recommend updated COVID booster shots for fall
Show More
Fort Bragg soldiers reunite with families after deployment
Fourth of July 2022 will cost families more this year
NC GOP unveils state budget; House backs Medicaid expansion path
2 Raleigh women shot while on business in California
Workers fired for not joining company's daily Christian prayer: EEOC
More TOP STORIES News