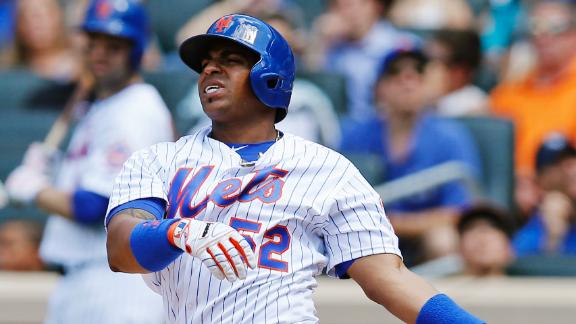 An MRI at the Hospital for Special Surgery in Manhattan revealed no structural damage to Noah Syndergaard's right elbow, the team announced. Syndergaard had departed a start against the Kansas City Royals earlier Wednesday after complaining of discomfort in the back of his pitching elbow.

He has been prescribed anti-inflammatory medication and has been cleared to do his normal work routine, although his availability for Monday's scheduled start against the Washington Nationals is not yet clear.

Outfielder Yoenis Cespedes also departed in the same sixth inning Wednesday with what ultimately was diagnosed as a mild sprain of his left wrist. Cespedes received a cortisone injection that should sideline him for a couple of days, but he is expected to avoid the disabled list.

Meanwhile, Zack Wheeler also dodged a bullet in his rehab from Tommy John surgery performed in March 2015. Wheeler, who had been slated to begin pitching in games this week, had developed elbow discomfort and was dispatched to New York for an exam with team doctors on Wednesday. The team announced that he received a cortisone injection for sensory nerve irritation in his right elbow, but that his surgically repaired elbow otherwise is sound.

Syndergaard had been examined for elbow discomfort after a May 1 start, but he proceeded in the rotation uninterrupted. The right-hander's fastball averaged 97.6 mph on Wednesday. That was 1.4 mph off his previous start a week earlier, when he tossed 115 pitches.

He allowed three runs on a season-high eight hits in six innings in the Mets' 4-3 victory against the Royals as his ERA crept upward to 2.08. He uncorked two wild pitches in a 91-pitch effort, picking up the win.

Cespedes had a similar wrist issue last season after joining the Mets, but it had not previously disturbed him this season, according to manager Terry Collins.

Cespedes grimaced on at least one of the four pitches he fouled off in a plate appearance against Royals left-hander Danny Duffy in the fifth inning Wednesday. Cespedes ultimately walked. He then was checked at first base by trainer Ray Ramirez and Collins.

Alejandro De Aza replaced Cespedes in center field when the Mets returned to the field in the top of the sixth. Cespedes had been 2-for-2 with a double and a walk before his departure. He is hitting .383 (18-for-47) over his past 13 games, which followed an 11-game stretch during which he went 3-for-35.

A team spokesman quoted Cespedes as saying before he departed for his medical exam: "My wrist started bothering me, and I didn't want to keep playing through that. So I just let Ray know. It didn't happen on a swing. I don't really know when it happened. But I just felt it starting to bother me, so I didn't want to push it."