The importance of Brandon Harris 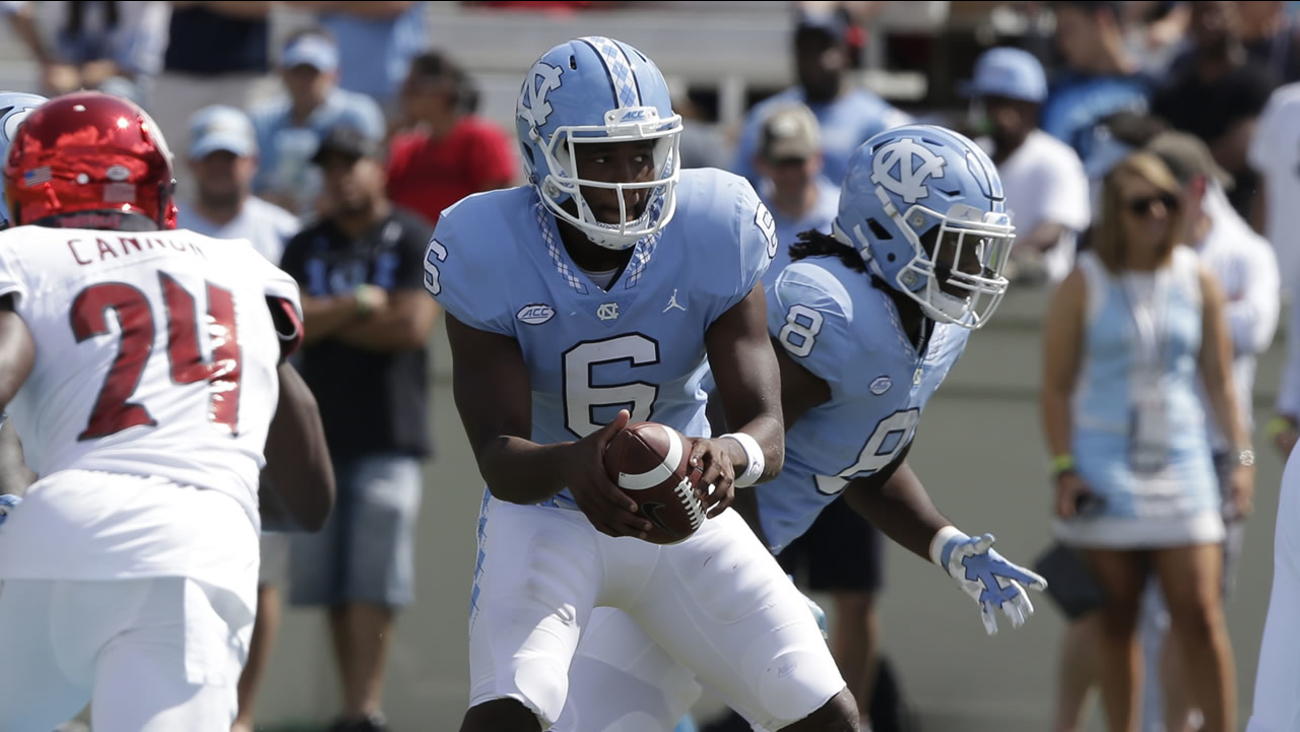 CHAPEL HILL, North Carolina (WTVD) -- We're a long way from knowing what Brandon Harris' ultimate on-field contributions will be for North Carolina this season. He might very well wind up being the backup to impressive frosh Chazz Surratt, he might start every game the rest of the way.

Harris struggled in the opener vs Cal, completing less than 50% of his passes and tossing two picks. Given the disappointment of that game, never mind being replaced by Surratt in the starting lineup for Louisville, it might've been easy for Harris to check out. He didn't, and when called upon in the second half vs the Cardinals, Harris responded, spinning it to the tune of 17-23 for 216 yards and a score.

His performance on the field is how Harris will ultimately be measured in Chapel Hill, but I think that'll be far from his only contribution. I've been impressed by Harris' interviews since his arrival at Carolina. He is honest, thoughtful and willing to make public the challenges he faces as a fall transfer into a brand new program and offense. He bluntly said that the quicker footwork required in Larry Fedora's scheme was an extremely difficult thing to pick up coming from a much more traditional dropback offense at LSU. Never did he make any declarative statements about coming to Carolina to play, rather than sit on the bench. He just worked (from what little we're privy too) and from all accounts, made his way into the team framework.

I was especially struck by his comments Tuesday night though. Coming from LSU, Harris has seen just about everything when it comes to the fanaticism that can surround the college game. While being careful not to imply that UNC fans were inferior to the Tigers crowd, he just said it was 'different'. Pressed on that, Harris recounted one of the 'fans' who reached out to him on social media following a tough loss:

The incident is long past, so maybe that explains some of his nonchalance when discussing that kind of madness, but still. There's an ease and seeming unflappability to Harris that I'd find awfully reassuring as a coach and a teammate. Larry Fedora repeatedly championed the fact that Harris 'has played in big games'. On or off the field, that kind of experience and personality is invaluable. I was further impressed by his answer when asked about Chazz Surratt, his primary competition at QB. However nice he may be, Brandon surely didn't transfer to the Tar Heels to sit on the bench. The possibility that may wind up happening doesn't seem to worry him.

I don't pretend to know Brandon Harris. I don't see the inner workings of the team and QB meetings or any of that. But given the slices of Brandon Harris I have seen, his addition can only be positive for the Heels. That may be on the field, it may not. I feel confident in knowing that either way, he'll be bringing plenty to the table.
Report a correction or typo
Related topics:
sportschapel hillunc
Copyright © 2022 WTVD-TV. All Rights Reserved.
TOP STORIES
Clayton police arrest man in shooting leaving 1 person injured
Wake County begins giving COVID booster shots for children ages 5-11
Biden: Monkeypox threat doesn't rise to level of COVID-19
Pfizer: COVID vaccine for kids 6 months to 5 years old 80% effective
Zibanejad leads Rangers to 3-1 win over Hurricanes in Game 3
Russian sentenced to life in Ukraine's 1st war crimes trial
1 person in hospital after a pedestrian was hit crossing I-95
Show More
Event for Ukraine raises money for paramedics on frontlines
78,000 pounds of infant formula arrives in US
Barber attempts to cut concerns about violence in Durham
12-year-old girl escapes burning Cary home
Texas woman sought in fatal shooting of pro cyclist: US Marshals
More TOP STORIES News