The most important thing in every major conference in the country 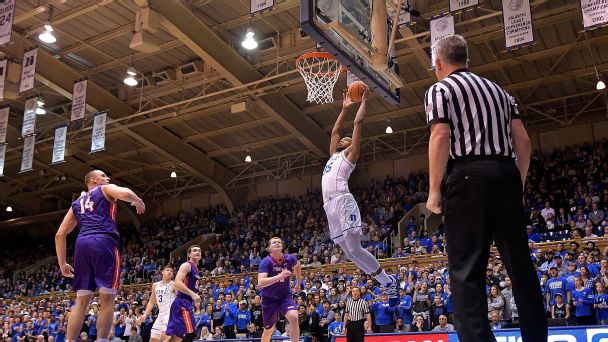 Conference play begins this week for most of the major conferences, and college basketball will enjoy a reset to the season in the post-College Football Playoff world.

With a multitude of contenders in each league, it's difficult to know what matters and what's worth ignoring in the buildup to each conference season.

Here are the most important things to know about every meaningful conference race in the country:

Right now, the Big Ten is a 3 a.m. rerun of a mediocre sitcom. The league is stale.

And the only fascinating battle in the conference involves Michigan State and Purdue, two teams that will play just once in the regular season -- on Feb. 10 in East Lansing. If you're a gambler, don't pick the field in this lukewarm assembly. Only Purdue and Michigan State seem capable of offering any fireworks in this league.

Minnesota has failed to match the preseason hype. Maryland is intriguing but turnover-prone.

Northwestern just surrendered 68 points in the first half of a Friday loss to Oklahoma, the greatest output in one half against a major-conference opponent in the past 10 years. A flawed Ohio State squad improved in December. Wisconsin, which played a difficult nonconference slate, has endured injuries and manufactured an unreliable offense during a 6-7 start.

This conference race feels like a Michigan State vs. Purdue affair plus a boring, albeit crowded, fight for the third spot in the league.

The Pac-12: The pros and cons of Arizona's 14-foot frontcourt

Arizona big man Deandre Ayton could carry Arizona to the Pac-12 title. The 7-foot-1 freshman has evolved into a serious NBA talent who could usurp Duke's Marvin Bagley III and take the No. 1 slot in next summer's NBA draft. With 7-footer Dusan Ristic (9.8 PPG, 6.3 RPG) installed next to him, Arizona's interior is an offensive catalyst for the Wildcats. No team in the league can match Arizona's combination of brawn and skill in the paint. But the lineup could create problems on the defensive end in a league filled with small-ball lineups and athletic big men. With Ristic and Ayton on the floor together, Arizona averages an impressive 1.26 points per possession, while connecting on 61.4 percent of its shots inside the arc, per HoopLens.com.

But the Ristic-Ayton lineups also surrender 1.10 PPP, an 11 percent increase over other setups. Sean Miller benefits from his team's size, but tinkering with the right crew to combat the versatile athletes in league play will be his most significant challenge and one that could determine the outcome of the league's race.

The SEC: The gap between Kentucky's now and its potential

Kentucky's problems -- issues the Wildcats overcame in past matchups via a collection of five-star talent no other SEC squad can match -- led to its second blemish of the year, an 83-75 loss to UCLA in New Orleans on Saturday.

In that game, Kentucky missed key free throws, squandered one-fifth of its possessions via turnovers and recorded a 6-for-21 clip from the 3-point line. Kentucky is an athletic, long assembly with turnover issues, a lack of reliable shooters and an unimpressive mark from the free throw line.

The eventual return of Jarred Vanderbilt and Jemarl Baker will not automatically fix this challenge for John Calipari's squad. If the Wildcats play elite defense and run opponents off the floor on the other end, however, they can still win the SEC title, especially if they hit their free throws.

But today's Wildcats are not better than Texas A&M right now, and the intriguing mix of Tennessee, Florida, Arkansas, Auburn and Alabama will complicate their pursuit of the conference title, too. Will Kentucky mature in the coming weeks and reach its potential just as the SEC race intensifies? That's the most important question in the league.

On Dec. 9, Duke lost to a Boston College team that made 58 percent of its 3-point attempts in a rocking Conte Forum. The Eagles had finished a combined 16-for-65 (about 25 percent) from the 3-point line in their three games before the Duke upset. The point? Don't judge Duke off one random road loss to a team that bucked its reality and made a million 3-pointers.

The most important element of the ACC race and Duke's place within it is the presence of a young man Mike Krzyzewski recently called "the most unique player I've ever coached." Marvin Bagley III (21.1 PPG, 10.9 RPG, 1.0 BPG) is the force every ACC opponent will plot to stop in league play. But he's surrounded by a seasoned star named Grayson Allen and promising young guards.

Krzyzewski has a history of leading teams with those tools to the Final Four. And the ACC's contenders -- Miami, North Carolina, Virginia and Notre Dame -- haven't done anything to change Duke's status as the unanimous favorite.

The Big 12: The unknowns that surround Kansas

A home loss to Arizona State and a neutral-site (Kansas City) loss to Washington tempered expectations for the reigning Big 12 kings. But Kansas will still enter league play favored to win its 14th consecutive Big 12 crown, a streak that would be a Division I record.

It is not clear, however, if a couple of fresh contributors will make an impact on their push for history. Silvio De Sousa, No. 28 in the 2018 class per ESPN.com, is a 6-8 forward who was recently cleared to practice with the Jayhawks and could make his debut in this week's Big 12 opener at Texas on Friday if he gains NCAA clearance. Billy Preston, a five-star forward, is still sidelined by an investigation surrounding a car he drove during an on-campus accident.

Those two, if they're available, could help a limited Kansas frontcourt that's desperate for depth. Plus, the Jayhawks have worked Arizona State transfer Sam Cunliffe, who became eligible in mid-December, into the lineup. Kansas at full strength is a different team. But there's no guarantee the Jayhawks will get to that point this season.

If you've watched Seton Hall this season, you know the Pirates possess the pieces to slide past Villanova, Xavier, Creighton and Butler in the contentious Big East battle. Although the indefinite suspension of forward Ish Sanogo could affect that ambition, Kevin Willard's team is still capable of competing with the best in the conference.

Wichita State's early games featured Landry Shamet, who missed the bulk of the offseason with a foot injury, attempting to regain his rhythm. As he grew, however, Markis McDuffie remained sidelined by a foot injury.

McDuffie, who led the Shockers in scoring and rebounding last season, played nine minutes in a tough win over Florida Gulf Coast on Friday. He'll need time to hit his stride, too.

He'll improve and play more minutes in future matchups. But Wichita State's top competitors in the American, Cincinnati and SMU, know who they are. But the Shockers will know who they can be only once McDuffie gets into basketball shape, feels comfortable on his foot and plays with the same aggression we witnessed from him a year ago. The speed of that process will affect the conference race.

After losing stars from last season's national runner-up, Gonzaga returned with a talented group that's backed by Silas Melson's increased workload and Killian Tillie's starring role. Saint Mary's returned Jock Landale and the bulk of its key contributors from a year ago.

The difference in the two Saint Mary's-Gonzaga regular-season matchups that could determine the WCC title could be the Gaels' poise and the slipping defense of the Bulldogs, who finished No. 1 in adjusted defensive efficiency on KenPom.com last season.