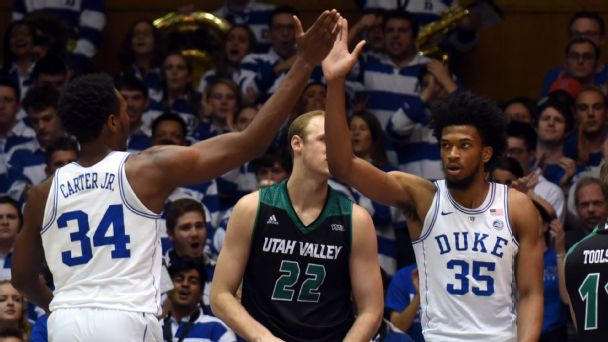 At a moment in basketball when "space and pace" are the buzzwords, the Golden State Warriors are the stylistic gold standard, and 3-point shots are launched in ever-increasing numbers both in college and the pros,Dukesure is marching to a different drummer.

The Blue Devils are actually shooting fewer 3s than the program has at any time in the past 15 years, with the single exception of the 2006-07 season. Nevertheless, you may have noticed that Mike Krzyzewski's bunch is the undisputed No. 1 team in the nation.

It has been, to say the least, an abrupt change, and it is centered on two freshmen in particular: Marvin Bagley III and Wendell Carter Jr.

Two seasons ago, Krzyzewski's rotation featured three players listed at 6-foot-5 (Grayson Allen,Luke Kennardand Matt Jones), leaving the power forward position, in effect, to the uber-talented yet svelte and somewhat perimeter-orientedBrandon Ingram. Last season, that position was held down by some combination ofJayson Tatumand, occasionally, Amile Jefferson, asHarry Gilesstruggled to stay healthy and on the floor in the 5-spot.

This season, by stark contrast, the power forward and center positions have been claimed emphatically by the Bagley-Carter consortium. Carter, for instance, has two inches and 55 listed pounds on Tatum.

Both freshmen crash the offensive glass, both shoot the occasional "Look, I can do this!" 3 just to please the folks watching from the professional ranks, and both are giving Duke precisely what the team has lacked during the past two seasons. With their hegemonic prowess on the offensive boards, Bagley and Carter are giving the Blue Devils a dramatically higher shot volume.

Among teams currently ranked in the AP top 25, in fact, Coach K's men are at the top of the heap when it comes to generating shot attempts.

Duke's number for shot volume is in more or less perfect synchronization with what eventual national champion North Carolina recorded last season in ACC play (103.3). Yes, it's early, and the Blue Devils' competition has included not only Michigan State and Florida, but also Elon and Southern. Nevertheless, Duke's season high for offensive rebound percentage came on a neutral floor against the Spartans. It is probable that this team will indeed continue to take care of the ball and generate second chances even in conference play.

Bagley's secret weapon is (wait for it) playing time

When we talk about bigs who can change the very nature of an offensive or defensive possession, we need to consider how many possessions these guys actually play. For example, you can watch college basketball for a very long time before you see someone crash the offensive glass like DeMarcus Cousins did forKentuckyin 2009-10, but, alas, Boogie averaged just 23 minutes a contest.

Bagley, on the other hand, is already distinguishing himself in this area. In fact, if he hadn't been poked in the eye by his teammate, Javin DeLaurier, early in the Michigan State game, the freshman would have an even better number for minutes played.

As seen on KenPom.com, Bagley has been on the floor for 76 percent of Duke's minutes to this point in the season. That puts the young man on the same level as past mainstay bigs like Caleb Swanigan, Jahlil Okafor and, yes, Anthony Davis. That is good company to keep.

Why is that important? Duke, it appears, is always going to be big on a possession-by-possession basis this season. True, Carter is "normal" in the sense that he does, can, and has picked up two first-half fouls. But whether it's Bagley and Carter, or Bagley and DeLaurier, or Bagley and Marques Bolden, or even (gasp) some fleeting duo that does not include Bagley, Coach K is likely to have continuous elite size on the floor. That, again, marks a dramatic change from Blue Devil teams of the recent past.

But what about defense?

If this is a talented and young Duke team, then custom dictates we must fret about the defense. Surely Miami, NC State or some other such usual suspect will come to Cameron Indoor in January and win by scoring 80-something points. Then we'll tut-tut solemnly and talk about how this bunch of nascent draft picks simply must become more disciplined on defense and how they need to buckle down. Lather, rinse, repeat.

It may be so, though Carter has brought valuable minutes to the table in terms of rim defense early in the season, and indeed Michigan State andTexasare the only opponents thus far to make half of their 2s against Duke. Still, this defense will most likely be a work in progress. Most notably, opponents have been allowed to attempt an uncharacteristically high number of 3s.

Then again, if you're a Duke fan in November, you'll take a defense that's a work in progress. For one thing, that describes the 2014-15 defense quite well. That was the season the Blue Devils gave up a combined 177 points to the Wolfpack and Hurricanes in back-to-back January losses, and all that team did was end up winning a national title.