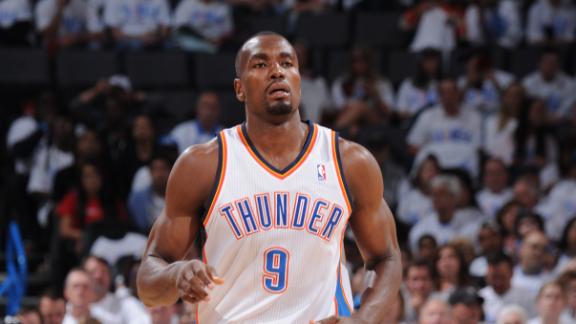 The Oklahoma City Thunder will not begin their Western Conference finals showdown with the San Antonio Spurs at anywhere close to full strength.

Thunder power forward Serge Ibaka is expected to miss the rest of the postseason after suffering a left calf injury in Oklahoma City's series-clinching win Thursday night against the Los Angeles Clippers, the team announced Friday.

Thunder general manager Sam Presti called it a Grade 2 strain of the plantaris, which takes time to heal and strengthen because of a high reinjury rate.

"I just want to express our disappointment for Serge, who, as we all know, is an elite competitor and someone that has proven to be a tremendous teammate," Presti said. "He was playing great basketball throughout the season. He's had a huge impact on our season to date."

Presti said in a conference call with reporters that Ibaka is unlikely to return even if the Thunder make it past the Spurs.

The 6-foot-10 power forward underwent an MRI on Friday after suffering the injury in the third quarter of Thursday night's win.

Last year, Thunder All-Star point guard Russell Westbrook was knocked out of the playoffs with a torn ACL in the first round against Houston. The Thunder rallied to win that series before losing to Memphis in the next round.

Presti believes the Thunder can rally and be ready for the Spurs.

"We have had this group together for a while, and they've been through some ups and downs, and this is just another one that hopefully is only going to make us better," Presti said.

Ibaka averaged 12.2 points, 7.3 rebounds and 2.2 blocks in 13 playoff games. During the regular season, he notched career highs with 15.1 points and 8.8 rebounds per game while leading the league in total blocks for the fourth consecutive season with 219.

During his emotional MVP acceptance speech, Kevin Durant singled out Ibaka for stepping up and erasing many of the team's mistakes while Westbrook recovered from his most recent knee surgery. While Westbrook was out, the Thunder went 20-7, and Ibaka's numbers jumped to 15.7 points, 8.5 rebounds and 2.8 blocks per game with 57 percent shooting from the field.

"For us, we as an organization have been in some situations in the past, and how we respond to those has always been the measure of the teams that we've had in Oklahoma City," Presti said. "Our expectation going forward is that we'll respond admirably."

The Spurs will open the series at home Monday in Game 1 with health concerns of their own, as star guard Tony Parker continues to recover from a hamstring strain. But coach Gregg Popovich said Friday that Parker is hopeful of being ready for the opener, whereas Oklahoma City will greatly miss Ibaka, its interior defensive anchor.

Oklahoma City swept its four regular-season meetings with the Spurs, who went 62-16 against the rest of the league for the NBA's best record this season.

Information from ESPN.com's Marc Stein and The Associated Press was used in this report.

Filling The Void Left By Ibaka
Brian Windhorst breaks down the impact of Serge Ibaka's calf injury on the Thunder going into its Western Conference finals matchup against the Spurs.