Tiger Woods has back surgery 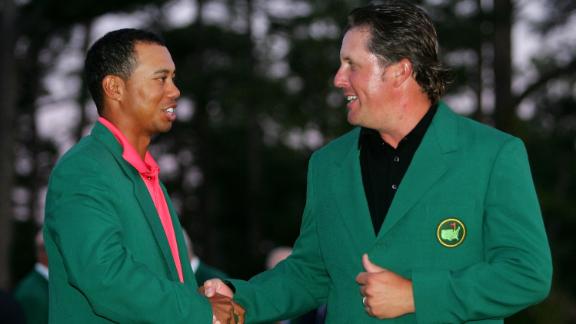 Tiger Woods will miss the Masters after undergoing back surgery earlier this week for a pinched nerve that has been hurting him for several months, the world's No. 1 player said Tuesday on his website.

It will be the first time in 20 years that Woods will not play in the event.

Sad to say I'm missing the Masters. Thanks to the fans for so many kind wishes. http://t.co/Ofbre9VHEL

- Tiger Woods (@TigerWoods) April 1, 2014The microdiscectomy was performed Monday by neurosurgeon Dr. Charles Rich in Park City, Utah. The statement said Woods will begin "intensive rehabilitation and soft-tissue treatment" within a week, and the goal is for him to return to competition "sometime this summer."

"After attempting to get ready for the Masters, and failing to make the necessary progress, I decided, in consultation with my doctors, to have this procedure done," the 38-year-old Woods said in the statement.

"I'd like to express my disappointment to the Augusta National membership, staff, volunteers and patrons that I will not be at the Masters. It's a week that's very special to me. It also looks like I'll be forced to miss several upcoming tournaments to focus on my rehabilitation and getting healthy."

It is not yet clear whether Woods will return in time for the U.S. Open (at Pinehurst No. 2 on June 12-15) or the Open Championship (at Royal Liverpool on July 17-20).

"It's tough right now, but I'm absolutely optimistic about the future," Woods said in the statement. "There are a couple [of] records by two outstanding individuals and players that I hope one day to break. As I've said many times, Sam [Snead] and Jack [Nicklaus] reached their milestones over an entire career. I plan to have a lot of years left in mine."

ESPN injury analyst Stephania Bell said that "there is a very good return rate following this type of procedure."

"Dr. (Robert) Watkins, who is known for treating many athlete for spine conditions out in Los Angeles, actually published a study where they looked at 80 professional athletes, across all sports including golfers -- 90 percent (were) able to return to their prior level of sport."

Bell estimated that the average recovery time for surgery like Woods had is 4 1/2 months.

"Tiger was gracious in keeping us updated of his condition and making us aware of his decision," Masters chairman Billy Payne said in a statement. "We wholeheartedly offered our best wishes for his immediate and long-term recovery. ... He is one of our most decorated champions and we look forward to his healthy return in 2015 and beyond."

Woods has been suffering from back spasms that were an issue during competition last fall and resurfaced again last month at the Honda Classic, where he withdrew during the final round.

He played the following week at the WGC-Cadillac Championship, where he acknowledged that his back bothered him during the tournament and especially during the final round, in which he shot 78 -- his highest final-round score as a pro.

On March 18, two days prior to the Arnold Palmer Invitational, Woods announced on his website that he would not play in that tournament, which he has won eight times, as his back problems had yet to subside.

On March 24, Woods said it was "too soon" to make a call on the Masters and that "was the frustrating thing about this."

Woods has played in every Masters since 1995, when he was an amateur. The following year, he missed his only cut at Augusta National just a few months prior to turning pro.

Woods is still four majors shy in his quest to tie Jack Nicklaus' record of 18 major titles. Only two players have won four or more majors after their 38th birthday -- Ben Hogan (5) and Nicklaus (4).

Since his last victory at Augusta, Woods has seven top-10 finishes in eight appearances and six top-5s, including last year, when he tied for fourth, four strokes behind winner Adam Scott.

As recently as a few months ago, Woods was very much anticipating this year's major championship venues. He has won six of his 14 majors on this year's tournament courses -- four at Augusta, one each at Royal Liverpool and Valhalla -- and has top-3 finishes in the two U.S. Opens played at Pinehurst.

"I've won at every one except Pinehurst," Woods said at his World Challenge event in December. "And I'm trending in the right way. I've finished second, third ... you get the picture, right? OK. So I'm looking forward to the major championships. They have set up well for me over the years, and I look forward to it."

That week, Woods lost in a playoff to Zach Johnson and has not been the same since. After a six-week break, Woods returned in January at Torrey Pines, a venue where he had won eight times, shot a third-round 79, missed the secondary cut and tied for 80th.

The following week, he tied for 41st in Dubai, his worst showing in that tournament.

After three weeks off, Woods returned to the PGA Tour at the Honda Classic and seemingly had no back issues until prior to the final round, after a third-round 65. He withdrew after 13 holes on Sunday.

Following a few days of rest and rehab, he managed to get into contention at Doral despite an opening-round 76. After a third-round 66, he again was limited by back problems.

The Masters begins April 10, and this will complete a different kind of slam for Woods. He now will have missed all four majors as a pro due to injury.

Tiger Out Of Masters
Bob Harig breaks down Tiger Woods' successful microdiscectomy for a pinched nerve and how long he will be out.

Tiger's Former Coach On Injury
Tiger Woods' former golf coach Hank Haney discusses Tiger's back injury, how Tiger has changed his swing to compensate for his injuries and how realistic Tiger's goal to reach 19 majors is.

Disappointing News For Tiger, Golf Fans
Andy North reacts to the news that Tiger Woods underwent back surgery and will miss the Masters.