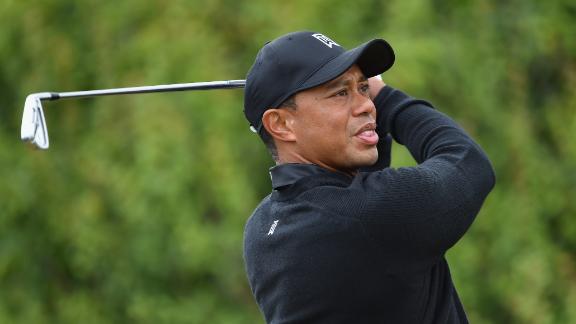 HOYLAKE, England -- Given his lack of competitive golf in the past four months due to back surgery, Tiger Woods would be excused if winning was not on his mind this week at the Open Championship.

But that's far from the case.

As he has typically throughout his career, Woods is not offering much in the way of concessions to rust at Royal Liverpool, where he played an 18-hole practice round Tuesday morning after first arriving here Saturday.

"I've been in circumstances like this," Woods said during a 30-minute news conference. "If you remember in '08 I had knee surgery right after the Masters. I won a U.S. Open. I didn't play more than nine holes, and the Sunday before the U.S. Open I didn't break 50 for nine holes and still was able to win it in a playoff, with an [torn] ACL and a broken leg.

"I've proven I can do it. It's just a matter of putting my game and giving myself the best chances this week to miss the ball in the correct spots, to be aggressive when I can and obviously to hole putts. That's a recipe you find for every major championship, but I've just got to do it this week."

Whether Woods will be able to put himself in that position will be of great interest when the Open begins Thursday. The 14-time major champion has played just two competitive rounds since March 31 back surgery, shooting 74-75 last month at Congressional Country Club to miss the cut at the Quicken Loans National.

Woods' game was far from sharp there, and he admitted there remains room for improvement as he continues to get stronger and his swing returns to optimum speed.

"It's getting better," he said. "Playing at Congressional was a big boost to me. The fact that I was able to go at it that hard and hit it like that with no pain. It wasn't like that the previous time I played. Playing at both the Honda and Doral [in March] I did not feel well. But to come back and be able to hit the ball as hard as I was able to hit it. I've gotten stronger since then, I've gotten more explosive, I've gotten faster since then. That's going to be the case. I'm only going to get stronger and faster, which is great."

Woods spoke on a variety of topics Tuesday:

• On his emotional victory here eight years ago, when he won his first major championship after the death of his father, Earl: "My life has certainly changed a lot since then. That was a very emotional week. As you all know, I pressed pretty hard at Augusta that year, trying to win it, because it was the last time my dad was ever going to see me play a major championship.

"And then I didn't play well at the [U.S.] Open. Missed the cut there miserably. And then came here and just felt at peace. I really, really played well. On Sunday I really felt calm out there. It was surreal at the time. I've had a few moments like that in majors where I've felt that way on a Sunday, and that was certainly one of them."

• On the differences between Hoylake in 2006 and now: "This is a different golf course than what we played in '06. It was hot, ball was flying [in 2006]. It was very dusty. Now, we're making ball marks on the greens, which we weren't doing then.

"When I played on Saturday it was running, it was fast. But on Sunday it just -- with the rain it just didn't move. The balls were checking. It played a little bit longer. I didn't play yesterday, just practiced a little bit. And then today the greens were faster. They were trying to get the greens up by a foot from what we saw on the weekend. And then I think they're very, very close to game speed now."

• On making the FedEx Cup playoffs -- for which he likely needs multiple top-three finishes in his next three events to make the top 125 and qualify: "The way this point structure is, you can make up ground pretty quickly with some wins. And if I get in the playoffs, and any time you're in the playoffs, you just win one event and you come out of nowhere to the top five very quickly."

• On his ability to play golf before the microdiscectomy surgery to alleviate a pinched nerve: "If I was feeling like that, then I couldn't play again. I actually couldn't get out of bed. The people who have had my surgery, they've all said the same thing. It just changes your whole life. It just takes away all the pain. Yeah, you're sore from the incision, but you don't have that radiating pain that goes down the leg.

"Once that was removed, even though I was hurting from the surgery itself, I knew I could come back and I could play. It was just a matter of time before I got out here and was able to play at the elite level again."

• On any apprehension he feels at this point: "I think that's one of the reasons why playing Congressional was such a big moment for me in that regard because I didn't have any setbacks. I could go at it that hard. I could play out of the rough. I could hit shots. I could go out as hard as I wanted to and I didn't feel any of the pain going down my leg like I did before. And I was able to recover each and every day. I think that's the key is I was able to recover. To go out the next day and feel fresh. In the beginning of the year, that wasn't the case. I just couldn't recover from day to day."

• On playing into his late 40s or even 50s in order to break Jack Nicklaus' major championship victory record of 18 -- with a Champions Tour reference: "Hopefully I [will] have it done by then, but I'm really looking for that cart."

• And on whether he had spoken to U.S. captain Tom Watson about the possibility of playing on the Ryder Cup team: "I haven't talked to Tom, no. But being a part of the Ryder Cup teams over the years, it's special to be on the teams. My first team was in '97. The only year I've missed was in '08; I was hurt at the time. Being a part of the team, whether it's Ryder Cup or Presidents Cup, every year for the Americans you're always a part of the team. You build these amazing bonds and friendships and camaraderie that lasts for lifetimes.

"And I think that's one of the neat things about being on these teams. You start appreciating it, for me, anyways. To go from one of the rooks to one of the veterans and be part of that whole transition over the years, it's been fantastic. I've been able to be on the teams with basically Phil [Mickelson] and Jim [Furyk] for the better part of 17 years or so. Hopefully I can do it again."

Tiger Trying To Figure Out Course
Tiger Woods explains his biggest challenge heading into the Open Championship and what he needs to do to win it.

Expectations For Phil, Tiger
Andy North discusses what to expect from Phil Mickelson and Tiger Woods at the Open Championship.