Tigers OF J.D. Martinez out 4-6 weeks after breaking right elbow 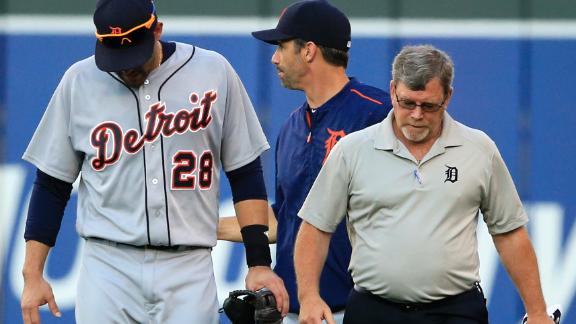 KANSAS CITY, Mo. -- The Detroit Tigers will be without outfielderJ.D. Martinez for approximately four to six weeks after he exited Thursday night's 10-4 win over the Kansas City Royals with a non-displaced fracture of the right elbow, according to manager Brad Ausmus. Martinez is scheduled to undergo a CT scan on Friday.

Martinez suffered the injury when he ran into the corner wall in right field while attempting to make a play on Royals OF Paulo Orlando's triple in the bottom of the second inning.

Tigers head athletic trainer Kevin Rand and Ausmus ran out to check on Martinez, who appeared to be favoring his right arm or shoulder before exiting the field.

Ausmus said Martinez knew immediately that the situation was serious.

"Yeah, he knew," said Ausmus, who initially feared it was a dislocated shoulder. "He said he heard a pop, or felt a pop."

Martinez, who led the team with 38 home runs last season and won a Silver Slugger award, will be placed on the 15-day disabled list.

According to ESPN's Stephania Bell, an injury of this nature is typically non-surgical, though that could change depending on what Friday's CT scan reveals. The bone usually takes approximately six weeks to heal, with the biggest challenge for a player being the ability to regain the strength and rotation required to resume baseball activities such as throwing and swinging.

Meanwhile, outfield prospect Steven Moya has been recalled from Triple-A Toledo. Moya, who is 6-foot-7 and 260 pounds, is batting .302 with 13 home runs for the Mud Hens in Toledo.

"He's the one that's doing the best down there, quite frankly," Ausmus said, declining to say whether any other options were discussed.

JaCoby Jones is another outfield prospect who could be an appealing candidate to the Tigers down the line, especially with his ability to play the infield as well, but the club probably wants him to gain more seasoning in the minors before promoting him.

Following Martinez's injury, Andrew Romine entered the game in center field, and the Tigers shiftedJustin Upton to left and Mike Aviles to right.

The Tigers are already down one outfielder: Center fielder Cameron Maybin is sidelined with tightness in his left quadriceps muscle, though team leaders stressed that the club can't use the injury as an excuse to buckle.

"We'll be OK," said ace Justin Verlander, who collected his seventh win of the season in Thursday's seven-inning performance. "Obviously, it hurts. J.D. is somebody we look to to drive in runs and be one of our middle-of-the-lineup guys. But, this lineup's got plenty of other guys to step in and I don't want to say fill that void -- he's matured to be one of the best hitters in the game the last few years and it's tough to replace -- but, I think our team is kind of meshing into what it needs to be."

Martinez is batting .286 for the Tigers this season with 12 home runs and 39 RBIs.

"We obviously all feel bad for J.D. It looked innocent. It looked like he was just chasing after a ball and the wall kind of got in his way and the next thing you know, it's a broken elbow," said veteran second baseman Ian Kinsler. "It's a little unusual, but at the same time, we need to move on and be ready for tomorrow. That's just the way sports works. ... He'll be back, eventually, to help us, and hopefully he recovers quickly."