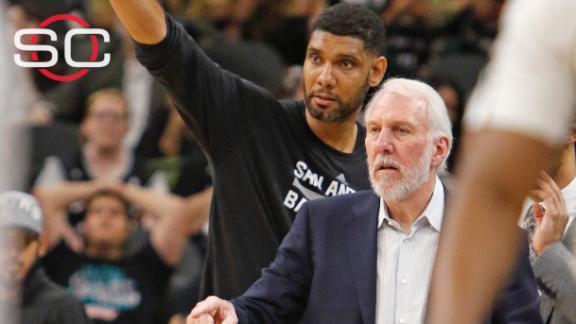 SAN ANTONIO -- The Spurs face the Golden State Warriors twice more in the regular season, but point guard Tony Parkerhas predicted that coach Gregg Popovich won't use any of the front-line contributors in those meetings.

"I think no one will play [against the Warriors]," Parker said on his French radio show, which was translated by News 4 San Antonio. "To Pop, the most important thing is that the players are rested for the playoffs. As for first place, he does not care. For us, the end of the regular season is a good time to rest. That's why we play hard throughout the season, trying to win the most games possible, to find ourselves in this situation of luxury. We are sure we will be the second seed and we can all rest before the playoffs."

Popovich held out injured forward Kawhi Leonard during Friday's win over the Memphis Grizzlies and rested Danny Green along with reserves Patty Mills and Boris Diaw. Then during a loss at Oklahoma City on Friday, the Spurs hit the court with just 10 active players as Popovich used Kyle Anderson, Mills, Diaw, Green and rookie Boban Marjanovic as Parker, Tim Duncan, Leonard and Manu Ginobili didn't even make the trip.

At shootaround Wednesday morning, when asked if Popovich cares about the home record, Parker said, "Are you seriously asking me that? He doesn't care at all."

Headed into the win over the Grizzlies on Saturday, the Spurs knew they needed to capture only one more victory to secure no worse than the No. 2 seed in the upcoming Western Conference playoffs. Throughout Popovich's tenure, the coach starts to rest players once the Spurs secure their postseason seeding.

"This is the earliest [the Spurs have had a seed locked], for sure," Parker said. "Me personally, I always like resting. It doesn't bother me.I think Pop does a good job. He's got a good feel for it. I don't think it's going to hurt us."

San Antonio has won 37 consecutive games at home, which ties the 1995-96 Chicago Bulls for the longest home winning streak to start a season in NBA history.

The team announced Monday that Leonard is probable for Wednesday's matchup against the New Orleans Pelicans.

"He's smart," Warriors coach Steve Kerr told CSNBayArea.com of Popovich. "They're locked into the No. 2 spot and there's no danger of anybody catching them from behind. And they're not trying to set any records. I will be interested to see if they rest guys at home. Do they want to go undefeated at home?"