Tony Parker will play in Game 3 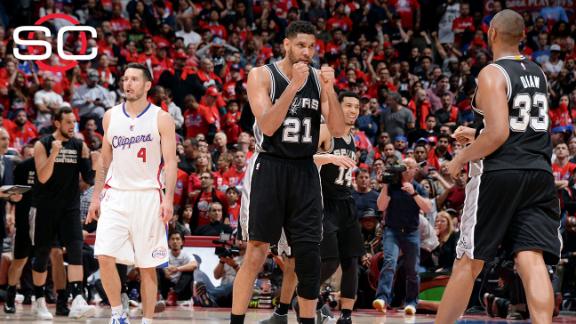 SAN ANTONIO -- Point guard Tony Parker will play for the San Antonio Spurs in Game 3 on Friday against the Clippers in the Western Conference playoffs.

Parker departed in the final five minutes of Game 2 on Wednesday due to tightness in his right Achilles tendon. He began the game already nursing a twisted left ankle and a bruised left quadriceps.

"I didn't doubt he was going to [play]," forwardTim Duncansaid after Friday morning's shootaround. "I'm glad he's feeling better. He's ready to rock. He's hoping to have a good one tonight."

There's a good chance that Parker, who played nearly 30 minutes in Game 2, could have his minutes scaled back, which could put San Antonio in a bind defending Clippers point guard Chris Paul, who scored 32 points and had six assists in Los Angeles' Game 1 win.

"I'm sure we'll have different guys on him, throwing different looks at him," guard Danny Green said of Paul. "I might start on him, who knows? But if not, I'm sure I'll have some time on him. Kawhi [Leonard] will have some time on him, even Cory Joseph. So we'll see how it goes. We'll throw different looks at him, and just try to contain him and not let him get off like he did in Game 1."

Parker had five assists, one steal and scored only one point while missing all six of his attempts from the field in Game 2.

He acknowledged after Game 2 that his Achilles injury was basically an aggravation of an ailment that forced him out of a game against Oklahoma City on April 7.

The first-round series is tied at one win apiece.