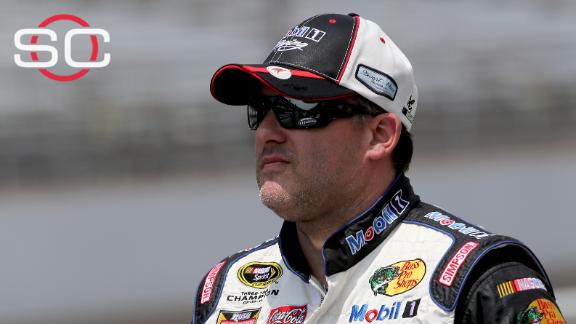 Tony Stewart claims he did not see Kevin Ward Jr. until just before his sprint car struck the 20-year-old driver, and says Ward actually tried to make contact with Stewart's car in the accident that resulted in Ward's death.

Stewart's local attorney, Brian Gwitt, filed the driver's response Friday to the wrongful death lawsuit brought by Ward's parents. The response, filed in U.S. District Court in Utica, New York, states that Stewart didn't even know who was on the track at the time, and that Ward was responsible for his own death because he not only walked out onto an active race track but also because he was under the influence of marijuana at the time.

The lawyer for Ward's parents commented on the filing to ESPN.com on Saturday, stating: "If Stewart didn't see Ward until just prior to impact, Stewart doesn't look where he's driving. Five other drivers easily avoided Ward, and Stewart revved his engine and hit him. As for whether Ward had smoked marijuana a few days before the race, that doesn't give Stewart the right to run Kevin over."

Ward's parents, Kevin and Pamela, seek unspecified damages for their son's pain and suffering as well as economic benefits and support he could have provided them.

Kevin Ward Jr. was killed Aug. 9, 2014, in an Empire Super Sprints race at Canandaigua (N.Y.) Motorsports Park when, after crashing, he approached the other cars on footas they were riding around under caution. Stewart's car struck Ward, who was pronounced dead at a hospital 45 minutes later.

Stewart was not indicted by a grand jury, and Ontario County (N.Y.) District Attorney Michael Tantillo said Ward had enough marijuana in his system to influence his actions. According to Stewart's response, Ward's toxicology report indicates that Ward used marijuana within five hours of the event.

The three-time Sprint Cup champion has never talked publicly about what happened that night, other than to say it was "100 percent an accident."

"Stewart did not see Ward, Jr. or anyone else walking on foot on the track until just prior to contact, and did not know the identity of the person walking on the track until afterwards," the Stewart response stated. "Stewart was not aware that Ward, Jr. had crashed because the crash was behind him, and was not aware that anyone was walking on the track. Stewart did not know Ward, Jr., and had never had a previous track incident with him. Ward, Jr. approached Stewart's car and attempted to make contact with it. As a result of Ward. Jr.'s actions, Ward, Jr. was killed."

Ward's parents contend that Stewart failed "to steer clear of Ward while all other drivers remained a safe distance from [him], and hitting the gas on a 700 horsepower sprint car proximately caused the untimely death of Kevin."

Pamela Ward has said she didn't believe Stewart intentionally tried to kill her son but his actions led to her son's death. She said she did not believe her son was under the influence of marijuana.

Stewart, in his answer to the complaint, denies the allegations that his actions resulted in Ward's death. He claims that Ward's father, who owned the car, also had a responsibility to make sure his driver did not use drugs prior to the event.

Stewart also said that the Wards gave up their right to sue other participants in the race as part of the waiver signed to compete in the event.

No trial date has been set. A scheduling conference is set for Oct. 8.