Tony Stewart suffers back injury in non-racing accident on ATV 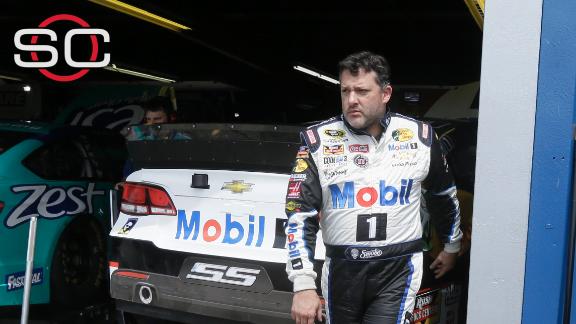 Three-time Sprint Cup champion Tony Stewart is being hospitalized for a back injury he suffered in a non-racing accident while driving an all-terrain vehicle, Stewart-Haas Racing announced Tuesday.

Stewart is awake, alert and able to move his extremities, according to a statement from Stewart-Haas Racing spokesman Mike Arning, who said the accident happened Sunday on the West Coast and wouldn't specify where Stewart is hospitalized.

Fox Sports reports that Stewart flipped a sand buggy outside of San Diego and was airlifted to a hospital.

Arning said the team is not expected to make any further announcements about Stewart's condition until Thursday afternoon.Stewart was in Arizona on Saturday night at the Barrett-Jackson auction in Scottsdale and was interviewed on live television from the event.

"We have received word from Stewart-Haas Racing of Tony Stewart's accident and injury," NASCAR chairman Brian France said. "On behalf of everyone at NASCAR, I wish Tony a full recovery and look forward to seeing him back in our sport when he's ready to return."

The 44-year-old Stewart has announced that 2016 would be his final Sprint Cup season. The first practice at Daytona International Speedway is Feb. 12, with the exhibition Sprint Unlimited set for Feb. 13 and the season-opening Daytona 500 scheduled for Feb. 21.

Stewart broke two bones in his right leg in August 2013 in a sprint car crash at Southern Iowa Speedway in Oskaloosa, Iowa. The injury forced him to miss the final 15 races of the 2013 season.

Missing those races dropped Stewart to 29th in the standings, the first of what has been three frustrating years for Stewart. He struggled throughout 2014 and finished 25th in the standings after missing three races following his involvement in a tragic sprint car accident in August that killed 20-year-old Kevin Ward Jr.

Last season, he competed in all the events but finished 28th in the standings with a career-worst average finish of 24.8.

Stewart wouldn't necessarily have to compete in the Daytona 500 to be eligible for the Sprint Cup title. NASCAR grants waivers on a case-by-case basis that allow a driver to miss races and still retain eligibility.

Stewart was granted a waiver in 2014 but failed to qualify for the Chase. Last year, Kyle Busch missed the first 11 races with an injury but came back and won four regular-season races and the season finale to capture the 2015 Sprint Cup title.