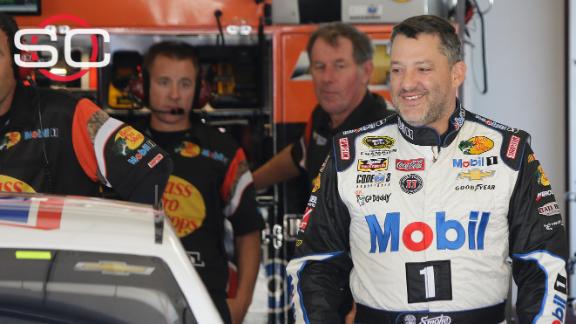 Tony Stewart, who has missed the first eight races of the 2016 Sprint Cup season with a broken back, will return to NASCAR Sprint Cup racing this weekend at Richmond International Raceway.

The three-time Sprint Cup champion made the announcement with a tweet Thursday morning.

"The Dr's said my scans "looked much better than they thought they would after 3 months". So they cleared me," Stewart tweeted.

Stewart suffered a burst fracture of his L1 vertebra Jan. 31 on a hard landing where he dropped 20 to 25 feet in a dune buggy in California. He said he was going only 5 mph at the time.

While he has been able to attend races and drive a passenger car for several weeks, Stewart has had to wait for the bone to heal enough so he wouldn't suffer a catastrophic back injury if he crashed again. Brian Vickers and Ty Dillon have shared the Stewart ride since the start of the season, which Stewart already had announced would be his last in NASCAR's top series.

While Stewart is expected to compete the entire Richmond weekend, the team plans to have Dillon at the track for the race Sunday as a standby driver in case Stewart has a problem.

NASCAR granted Stewart a waiver to be eligible the Chase for the Sprint Cup because he has not competed every week. Last year, it granted Kyle Busch a waiver after he missed the first 11 races because of injuries suffered in the season-opening Xfinity race at Daytona. Busch still had to win a race and be top-30 in points after the regular season ended in September at Richmond in order to qualify for the Chase. Stewart will have to do the same.

"NASCAR received the appropriate medical clearance documentation allowing Tony Stewart to resume normal racing activities," NASCAR Executive Vice President Steve O'Donnell said in a statement. "We also have granted the request from Stewart-Haas Racing for a waiver for Tony to be eligible to qualify for the Chase for the NASCAR Sprint Cup. As he begins his final season, we wish Tony the best of luck."

Stewart had expected to get the waiver.

"I would assume that it would fall right in line with that," Stewart told reporters Wednesday. "I don't know why it wouldn't. I guess it's not really been on my radar because I just assume that it's going to be the same criteria to get in.

While Stewart will race this weekend at the three-quarter-mile Richmond track, he plans to not race the full event the following week at Talladega Superspeedway, the high-banked 2.66-mile superspeedway. He will start the race at Talladega and then have Dillon get in the car early in the race.Stewart does plan to participate in a Goodyear tire test next Tuesday and Wednesday at Indianapolis Motor Speedway.

"We're taking a strategic approach to my return," Stewart said in a statement. "Richmond is a track where I feel very comfortable and because it's a short track, the speeds are substantially less. The Goodyear test in Indy is sort of a controlled environment, allowing me to get more acclimated with my car at higher speeds. We'll start the Talladega race to get the points, but understanding the style of racing and the higher potential of getting involved in an incident, we thought it was best to minimize the amount of time I'm in the car. I'll return fulltime at Kansas [the following week] and enjoy every moment I can in my final year of Sprint Cup.

"I appreciate everyone's patience and all the support they've given me the last couple of months, but the best medicine will come this weekend at Richmond when I finally get to go racing."

Stewart said Wednesday the only thing he hasn't been able to do, other than race, is play golf. He's been doing work on his Indiana property, and he said his back "hasn't pushed back" yet.

"I've been staying busy more than anything," Stewart said. "I can't say that I've been in therapy a lot. What I've been doing out on my property when I go home, he's like you're getting just as much benefit doing that as you are being in here with me. I've just been staying busy. ... Over the last two weeks, I've probably cleared six acres of trees out with a skid-steer."