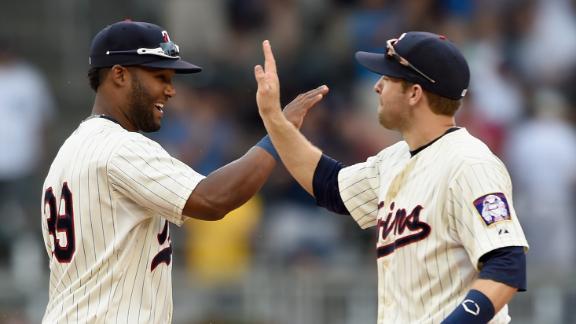 MINNEAPOLIS -- Brian Dozier is an American League All-Star after all.

The Target Field public address announcer broke the news to Dozier as the top of the fourth inning was about to begin against the Detroit Tigers. As a close-up of Dozier at his position was shown on the video board, Dozier doffed his cap to the roaring crowd.

Dozier found out before the game, but the moment on the field was one he'll remember forever.

"I get chills even thinking about it right now. It was pretty cool, the standing ovation and all that stuff," Dozier said.

Dozier was beaten out by Kansas City Royals third baseman Mike Moustakas in an online contest for the last spot on the team, despite an aggressive marketing campaign by the Twins to drum up votes. The team had a bulldozer parked on the plaza in a thematic display outside the ballpark this week.

This will be Dozier's first All-Star appearance. He's in his fourth major league season.

"Very humbling. It's pretty cool," said Dozier, who participated in the Home Run Derby last year during the All-Star festivities at Target Field.

The pleasant surprise Saturday meant a sudden change to his All-Star break itinerary. He and his wife, Renee, had a cabin reserved for a rest-and-relaxation trip to the north woods. Dozier hastily told his wife and family the news before the game, before politely reminding them he had a game to focus on.

"I don't know if we have to eat a deposit or whatever it is, but I'll take it going to Cincy," Dozier said, smiling.

The All-Star Game is Tuesday at Great American Ball Park in Cincinnati.

Jose Altuve of the Houston Astros and Jason Kipnis of the Cleveland Indians were the second basemen originally selected for the squad, but Dozier's slick fielding and production at the plate were impossible to ignore. Dozier is batting .259 with 19 home runs and 49 RBIs plus a league-leading 67 runs and 48 extra-base hits.

"It kind of was a backward way to get in there, but the good news is he's going to be in there," manager Paul Molitor said.