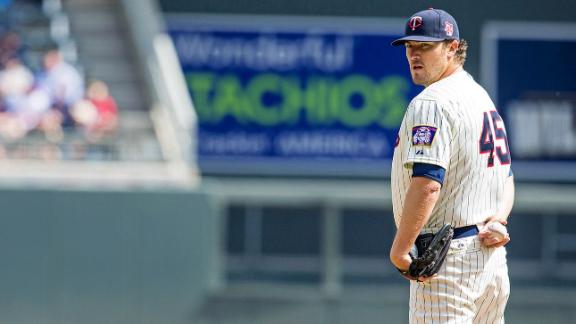 Pitcher Phil Hughes has reached agreement on a three-year, $42 million guaranteed contract extension with the Minnesota Twins, the team announced.

Hughes expressed his excitement over the deal in a tweet Monday.

The deal includes a limited no-trade clause and a chance to make $1 million in performance bonuses over the life of the contract. The extension overwrites the final two years and $16 million remaining on his current contract.

Hughes' new deal includes an annual salary increase of $1.2 million over the $8 million he had previously been owed in 2015 and '16. The overall value of $58 million over five years makes his new contract the largest for a pitcher in Twins franchise history.

Hughes will be 33 years old at the conclusion of the contract.

Near the end of the 2014 season, Hughes turned down a chance to pitch, even though one more out would have earned him a $500,000 bonus.

A half-million-dollar bonus would have kicked in if Hughes reached 210 innings this year, but he finished with 209 2/3 after a rain delay forced him out of his final scheduled start.

"I just didn't think it was right," Hughes said in September. "If I were fighting for a playoff spot, I'd 100 percent be available. But given the circumstances, I don't think it's the right thing to do."