Two teams are dancing, bubbles are bursting and Duke, Kentucky get big wins 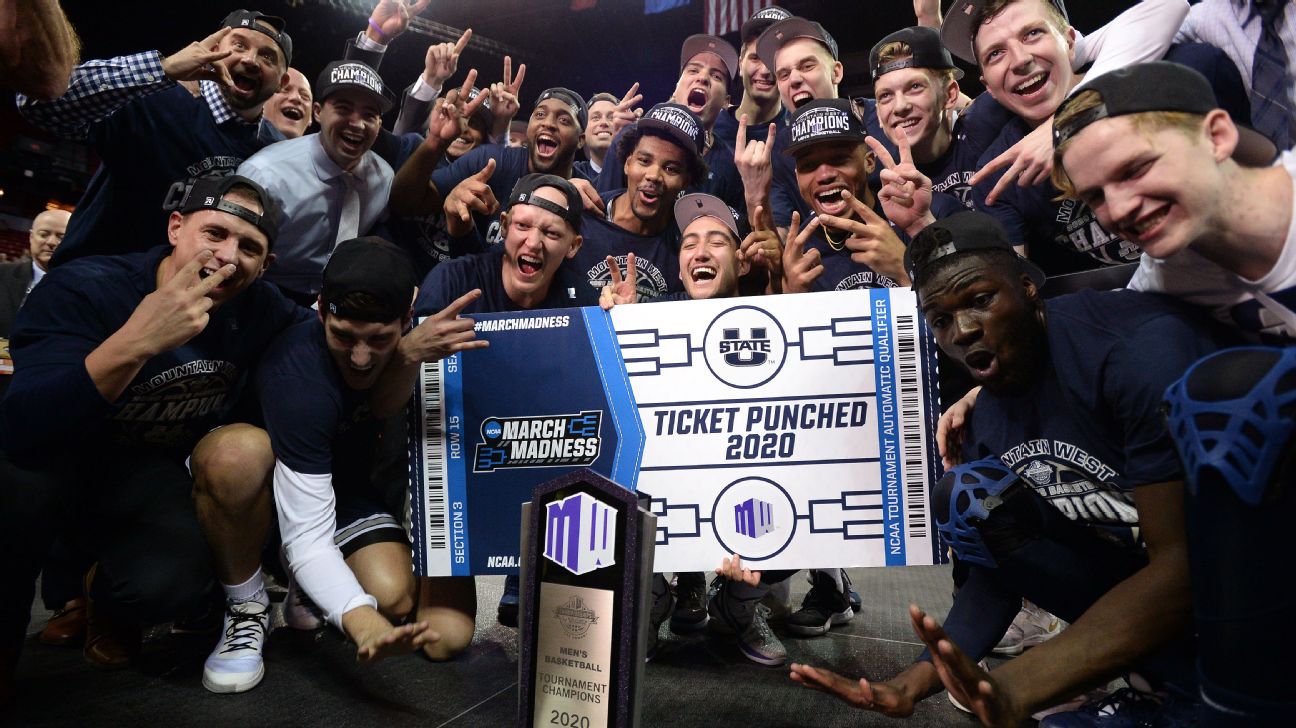 It was bubble carnage across the country on Saturday.

John Gasaway will cover it in full in our Bubble Watch, but here's the CliffsNotes version: Almost every bubble team lost. Rutgers was the big winner, beating Purdue on the road and very likely punching a ticket to the NCAA tournament. It will be the Scarlet Knights' first time dancing since 1991. Oklahoma also might have punched its own ticket, coming back from a 20-point deficit to beat TCU behind Austin Reaves' 41 points -- including the game-winning shot with 0.5 seconds left.Cincinnati got a putback with two seconds left to beat Temple and keep its hopes alive.

Nearly everyone else lost, including Texas, which got throttled at home by 22 points at the hands of Oklahoma State. The Longhorns had won five in a row entering that game, including consecutive wins over West Virginia, Texas Tech and Oklahoma ... and might have undone all of that with the defeat.

Things got worse for bubble teams when Utah State beat San Diego State in the Mountain West title game, making the Aggies the first team in the 2020 NCAA tournament -- and shrinking the number of available spots in the field by one. More on that in a second.

Outside the bubble, Baylor created some more potential 1-seed drama by losing its third game in two weeks. That said, it seems like a stretch to think the Bears can slide that far in the pecking order, even with another loss in the Big 12 tournament. Wisconsin continued to roll and earned itself a share of the Big Ten regular-season title with a road win at Indiana, while Creighton completed its sweep of Seton Hall and forced a three-way split at the top of the Big East along with the Pirates and Villanova.

Virginia beat Louisville to win its eighth game in a row and finish tied for second place in the ACC (Florida State won the regular-season title). But considering where Tony Bennett's team was two months ago, one can make the case that this is Bennett's best coaching job in Charlottesville.

Belmont also punched a ticket to the NCAA tournament thanks to a layup in the final seconds fromTyler Scanlon-- after a beautiful backdoor cut -- to beat Murray State and win the Ohio Valley.

The other big headlines from a wild final Saturday of the regular season:

1. Duke sweeps North Carolina for the first time since 2015

It was always a long shot that North Carolina could beat Duke in Durham on Saturday, but stranger things have happened in their rivalry. Some strange things happened inside Cameron Indoor Stadium, but the Tar Heels emerging victorious was not one of them. Duke led the entire game, eventually pulling away for an 89-76 win.

The Blue Devils finish in a tie for second place in the ACC, only one game behind Florida State in the standings. Due to tiebreakers, they will get the 4-seed in the conference tournament. North Carolina showed some late-season flashes, but the Tar Heels will enter the postseason at 13-18 (6-14 ACC) -- tied for last in the standings.

On senior night, Justin Robinson earned the first start of his Duke career and delivered. He played 25 minutes, finishing with 13 points, 6 rebounds, 3 assists and 4 blocks. David Robinson's son has become a surprise member of the rotation in the past couple of weeks and has now notched back-to-back double-figure outings.

Mike Krzyzewski has limited his bench minutes the past few games, but Robinson has provided some size inside. Aside from Robinson, Krzyzewski has had success with a smaller lineup: four perimeter players surrounding Vernon Carey, with Wendell Moore in an undersized power forward role.

It worked again against Carolina, with Tre Jones going for 21 points and 11 assists, Cassius Stanley scoring 19 points and Carey dominating the paint with 25 points and 10 boards.

2. Mountain West title game shakes up top and bottom of the bracket

We briefly mentioned it above, but the Mountain West championship game was must-see TV for both bubble teams and top-seed hopefuls. Utah State beat San Diego State on a Sam Merrill 3-pointer in the final seconds, giving the Aggies the automatic bid.

Utah State was unlikely to receive an NCAA tournament without that win. The Aggies had wins over Florida and LSU, but not much else on their résumé. At the very least, it would have been a long, anxious wait until Selection Sunday. Now that the Aggies are in, however, Merrill, big man Neemias Queta and double-double threat/glue guy Justin Bean are good enough to win a game.

It was bad news for bubble teams, as the available spots shrink. We're talking to you, NC State and Cincinnati and Stanford and Northern Iowa and Texas and other teams hoping to grab one of those last few spots in the field. Whichever team is the first team left out of the field -- last year it was UNC Greensboro -- might have Utah State to blame.

The other ramification is: San Diego State's grasp on a 1-seed might have loosened completely with the loss. Dayton has been waiting to grab that spot since San Diego State suffered its first loss of the season at UNLV a few weeks ago, and now the Flyers might have the edge if they can go out and win the Atlantic 10 tournament. Dayton toyed with George Washington for about 27 minutes on Saturday but ended up with a blowout win thanks to a monster second half from Obi Toppin.

San Diego State owns wins over Creighton, Iowa and BYU, which are vastly superior to Dayton's wins -- but the Flyers are higher than the Aztecs in the NET and at least three of the five other metrics the committee uses. Dayton also doesn't have a Quadrant 3 loss on its résumé.

If the Flyers win the A-10 tournament, there is going to be legitimate 1-seed drama.

3. Kentucky comes back to stun Florida

Kentucky's day didn't start off well. John Calipari tweeted out an announcement in the morning: Point guard Ashton Hagans didn't travel with the team to Saturday's game at Florida and would be taking a few days off for personal reasons. The Wildcats then struggled without their defensive leader for most of the first 30 minutes against the Gators, trailing by 18 with just under 12 minutes remaining. Then, Kentucky leading scorer and SEC Player of the Year candidate Immanuel Quickley fouled out with nine minutes left.

So what happened in between? (1) Kentucky's role players answered the bell. Keion Brooks, in his first start since mid-January, finished with 10 points and three rebounds. Fellow freshman Johnny Juzang buried two 3s and finished with 10 points and two assists. Nate Sestina came off the bench to score nine points and grab six rebounds. (2) a combination of the Wildcats' smothering defense and Florida's anemic offense. Kentucky stepped up on the defensive side of things, holding the Gators to just six points in the final eight minutes. Florida simply didn't have an answer late in the game, without a go-to guy to demand the ball and make a play. (3)Nick Richards dominated the interior late, finishing with 19 points. Florida had its way inside for most of the first 30 minutes, but Kentucky owned the paint late.

Kentucky showed some real fight in its comeback and showed its role players have the potential to provide some quality depth in March. The Wildcats made a statement in those final 10 minutes in Gainesville -- but it would still help if they get Hagans back for the postseason.

Wisconsin struck first in the Big Ten regular-season race on Saturday, winning at Indiana to clinch at least a share of the title. But Maryland and Michigan State still have a say in the proceedings, and both the Terrapins and Spartans face difficult home tests. Maryland welcomes Michigan to town, and both teams are hoping to get some momentum entering the postseason. The Terrapins have lost three of four to fall completely out of the mix for a potential 1-seed on Selection Sunday, while Michigan beat Nebraska on Thursday to snap a two-game losing streak.

On the other side of things, Michigan State and Ohio State are rolling down the stretch of the season -- and will battle in East Lansing on Sunday. Both teams have won four in a row and are squarely in the mix for top-four seeds in the NCAA tournament. This is the first meeting of the season between the two teams.

2. Title and bubble implications in the American

The American Athletic Conference regular-season championship will come down to the final day of the regular season. Tulsa already has clinched at least a share after the Golden Hurricane won at Temple on Wednesday and Houston lost at UConn on Thursday. On Sunday, the Cougars will hope to forge a tie atop the standings when they welcome Memphis to town -- while Tulsa heads to Wichita State. A Houston win and a Tulsa loss would leave the two teams tied for first, alongside Cincinnati after the Bearcats' late win over Temple.

The bubble picture in the league also will get some more clarification on Sunday. Wichita State is in trouble after losing at Memphis on Thursday and can't afford a home loss to Tulsa. Meanwhile, Memphis faces a must-win at Houston to have hopes heading into the conference tournament.

3. Bids will be handed out

The first two bids to the NCAA tournament were earned on Saturday, with the Mountain West and Ohio Valley having the first conference tournament title games. Sunday will bring three more, with the Missouri Valley, Atlantic Sun and Big South set to hold their championships. The Missouri Valley has had one of the wildest conference tournaments so far, with Arch Madness seeing the top three seeds bounced in the quarterfinals. Sunday's title game will feature No. 4 Bradley taking on No. 7 Valparaiso. The other two title games were finalized on Friday night: Top-seeded Liberty will battle Lipscomb in the Atlantic Sun in a rematch of last year's championship game, and 2-seed Winthrop will host 5-seed Hampton, which beat top-seeded Radford on Friday, in the Big South. 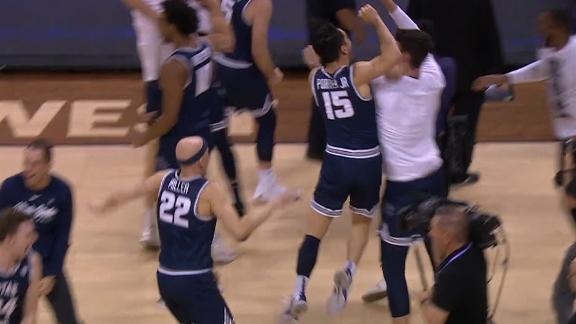 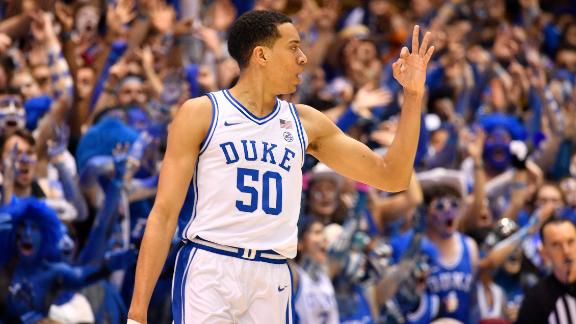