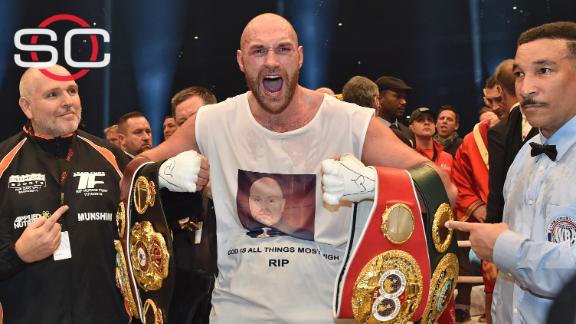 Tyson Fury, named after Mike Tyson, joined the Hall of Famer in the annals of heavyweight history as he dethroned long-reigning world champion Wladimir Klitschko by unanimous decision Saturday at Esprit Arena in Dusseldorf, Germany, where the pro-Klitschko crowd sat in disbelief as the massive upset unfolded.

Fury did not look particularly good, but he was busier, landed more punches and had the spring in his step that Klitschko lacked. The 39-year-old Klitschko appeared to grow old in the ring as he was outhustled throughout the fight by the 27-year-old British mandatory challenger.

In the end, there was no miracle comeback, even though Klitschko's trainer, Johnathon Banks, told Klitschko in no uncertain terms as early as following the 10th round that he would need a knockout to win.

When it was over, Fury and his team celebrated as if they knew they had won. There was no such celebration in the Klitschko corner as ring announcer Michael Buffer read the judges' scorecards.

Ramon Cerdan scored the fight 116-111, while judges Raul Caiz Sr. and Cesar Ramos both had it 115-112. ESPN.com also scored the fight 115-112 for Fury, who won Klitschko's cadre of alphabet title belts and the lineal world championship. According to Klitschko's camp, though, Klitschko has a clause in his contract that calls for an immediate rematch at his option, so a sequel is likely.

"This is a dream come true," said an emotional Fury, who broke down in tears in the ring after the fight. "We worked so hard for this. I've done it.

"It's hard to come to foreign countries and get decisions. It just means so much to me to come here and get the decision."

Fury, who had trash-talked endlessly during the buildup to the fight, snatched the microphone and addressed Klitschko and the crowd of some 50,000, including many Brits who made the trip.

"I'd like to say to Wladimir, you're a great champion," Fury said. "And thanks very much for having me. It was all fun and games during the buildup."

Then, as Fury has often done, he sang a song -- in this case an off-pitch rendition of Aerosmith's "I Don't Want to Miss a Thing" to his wife.

Klitschko (64-4, 54 KOs) was the heavy favorite to retain the title, but from the outset, Fury (25-0, 18 KOs) was putting in more work. Although many of the rounds were close, he appeared to edge most of them.

Klitschko did not quarrel with the decision.

"Tyson was the faster and better man tonight," Klitschko said. "I felt quite comfortable in the first six rounds, but I was astonished that Tyson was so fast in the second half as well. I couldn't throw my right hand because the advantage was the longer distance he had."

Klitschko's arsenal includes a devastating right hand and left hook and one of the best jabs in boxing, but he could barely land anything solid and certainly nothing that hurt Fury in a dreadful offensive performance.

Overall, Klitschko, a native of Ukraine who lives in Miami but is a huge star in Germany, where he has fought for most of his career, landed just 52 of 231 punches (22.5 percent), while Fury connected on 86 of 371 punches (23.1 percent). Neither man showed much offense at all, but Fury's was enough to bring home the belts.

He showed exceptional confidence, too, easily switching between his natural right-handed stance and a southpaw style and at times taunting Klitschko by making faces at him and dropping his hands to his side, almost inviting Klitschko in to hit him.

Klitschko never could pull the trigger, a sign of an aging fighter. Both seemed afraid to commit to their power shots in fear of what might be coming in return, but the 6-foot-9, 246-pound Fury, a rare challenger taller than the 6-6, 245-pound Klitschko, rendered Klitschko's offense virtually nonexistent.

In the fifth round, an accidental head-butt opened a cut under Klitschko's left eye. Round after round, Klitschko did not throw right hands, and Fury at one point in the seventh began to clown him when he put his own hands behind his back.

Klitschko finally connected with two good right hands in the ninth round, but Fury seemed unbothered as he responded with a heavy left hook.

After another dreadful round in the 10th, Banks was all over Klitschko in the corner, dropping expletives and telling him he needed a knockout, but Klitschko did not respond. He continued to hold and clinch Fury and suffered another cut on the outside of his left eye.

However, referee Tony Weeks, who had warned Fury several times during the fight for hitting Klitschko behind the head, took a point away when he did it again.

"He kept pushing my head down every time I got close to him," Fury said. "That point off, I thought I wasn't going to get [the decision], to be honest."

Klitschko seemed to try to go for the knockout Banks forcefully told him he needed in the 12th round, and he landed a nice left hook in the round, but it was too little, too late.

The fight was initially scheduled to take place Oct. 24, also in Dusseldorf, but it was postponed Sept. 25 after Klitschko suffered a tear in his left calf. Fury accused Klitschko of faking the injury and claiming he needed more time to prepare. Then, as is often the case in such a big fight, there was gamesmanship as the fight grew closer. The camps argued over the gloves and the kind of ring canvas during fight week, and then Klitschko had his hands wrapped without a representative of Fury in the dressing room to observe, and he was forced to have them rewrapped with a representative present.

In the end, however, Fury backed up his mouth and was perhaps prophetic at the final news conference earlier in the week when he said to Klitschko, "I'm coming and I'm coming very fast for you, Wlad. Hope you prepared well, and I know you will have. Old guy, young guy, old champion, new champion. 'Nuff said."

Fury ended one of boxing's most historic title reigns. The fight was Klitschko's 28th appearance (25-3) over two title reigns in a heavyweight world title fight, breaking the division record he shared with the great Joe Louis.

Klitschko, who had not lost in 11 years and had won 22 fights in a row, was also making his 19th title defense. His 18 consecutive successful defenses are third most in division history, behind only Louis (25, the record for any weight class) and Larry Holmes (20). With a title reign that lasted 9 years, Klitschko's was the second longest in division history behind Louis, who held the title for more than 11 years.

Klitschko's place in history and all the gaudy statistics never bothered Fury, whose confidence was obvious in the leadup to the fight, even though Klitschko, the 1996 Olympic super heavyweight gold medalist, owned the power and skill advantages. He also had the vast majority of the crowd behind him, but Fury never cared about any of that.