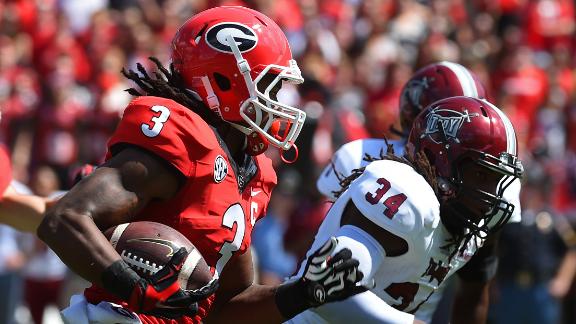 Georgia issued a statement Wednesday saying it plans to appeal the decision immediately. The NCAA membership committee that oversees the reinstatement process will review the appeal this week.The committee can reduce or remove the conditions the staff has imposed, but cannot increase them.

According to the NCAA, Gurley received the cash for signing memorabilia and other items over two years and must repay a portion of the money he received to a charity of his choice and also complete 40 hours of community service as conditions of his reinstatement.

Gurley, whom the NCAA said acknowledged violating NCAA rules, has already missed two games for the No. 11 Bulldogs (6-1, 4-1 SEC) and would be eligible to return Nov. 15 against No. 3Auburn.

The Bulldogs will be without Gurley for Saturday's game against Florida inJacksonville and next week's game atKentucky.

"We can only control certain things,'' Georgia coach Mark Richt said Wednesday. "My goal is to control how well we practice and how hard we prepare. That's been our focus all season long, and maybe a little bit more the last couple of ballgames.

"There are questions and things swirling around that could become a distraction. But I think our players have done a really good job of only worrying about things they can control.''

Georgia is nearing the three-week mark since Gurley, a star tailback who had been among the top Heisman Trophy candidates, was indefinitely suspended Oct. 9 while the school investigated allegations he received improper benefits for signing autographs.

Gurley, a junior, has rushed for 773 yards with eight touchdowns and has averaged 8.2 yards per carry.

In its release, the NCAA said Gurley's punishment, which equals 30 percent of his team's competition, "is consistent with precedent in similar cases. Additional withholding was strongly considered because the violations occurred over multiple years with multiple individuals and the student received extensive rules education about the prohibition of receiving payment for autographs."

The NCAA also said: "The university's due diligence in its investigation and the student's full disclosure of his involvement in the violations were factors in not imposing a more severe withholding condition."

In the weeks before Gurley was suspended, Allen sent emails to several news outlets, claiming he'd paid Gurley "thousands of dollars" over the previous 18 months to autograph large quantities of footballs, helmets, photos and other memorabilia.

In Gurley's absence, freshman Nick Chubb has started at running back and ran for 345 yards and three touchdowns while leading the Bulldogs to road victories at Missouri and Arkansas.

Gurley continued to practice with Georgia during the suspension, and Richt said he had no indication that the running back would not complete the season.

"I don't think there's any doubt Todd is going to finish with honor and have a great finish to his career here at Georgia, whenever it ends,'' Richt said.