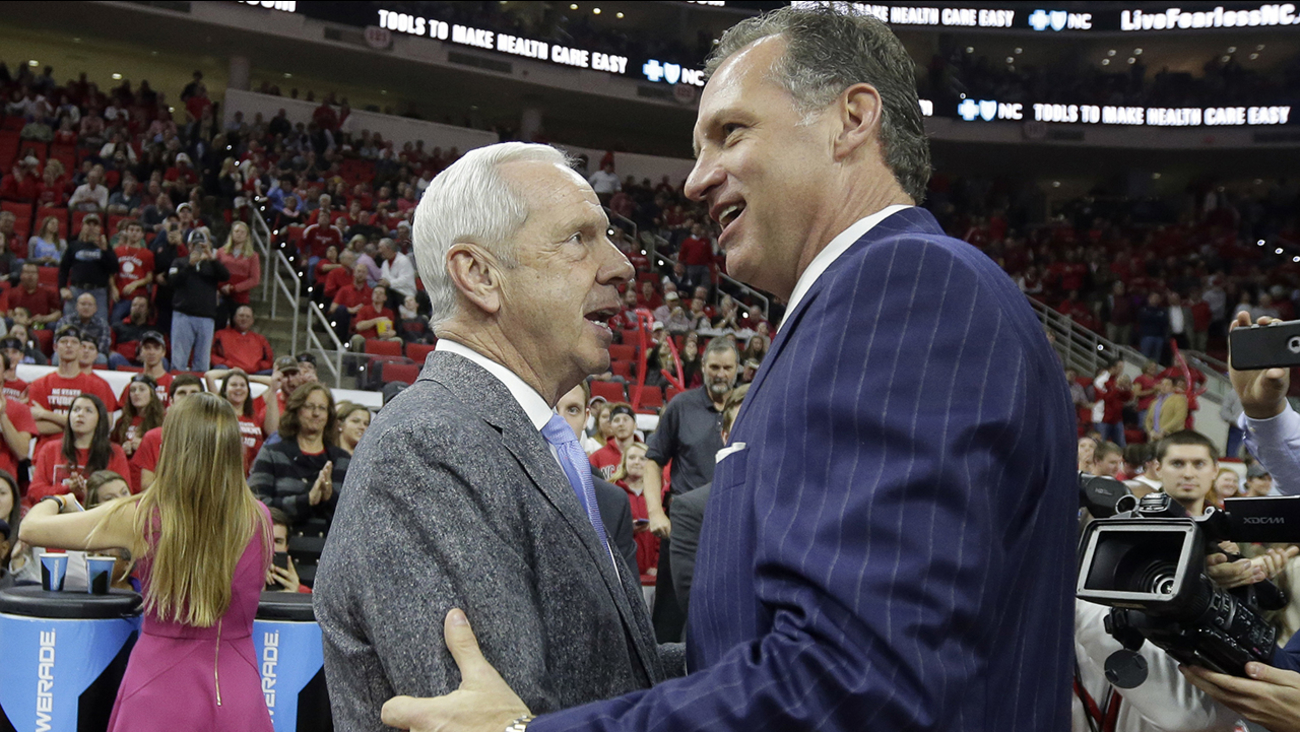 UNC coach Roy Williams and N.C. State coach Mark Gottfried may have faced each other for the last time in ACC play. (Gerry Broome)

The Tar Heels dominated the paint. They controlled the glass. They shot the ball well and took the crowd out of it early. When it was over, they had rolled to a 97-73 victory Wednesday night that kept them alone in first place atop the Atlantic Coast Conference while further increasing the uncertainty about the future of sixth-year Wolfpack coach Mark Gottfried.

Multiple sources independent of each other told ABC11's Mark Armstrong on Tuesday that N.C. State definitively decided during the weekend to fire head coach Mark Gottfried at the conclusion of the season. The school has denied it has made any decision about the future of the underachieving basketball program.

Since ABC11 broke that story, national outlets, including ESPN and The Sporting News have followed with reports about Gottfried's tenuous future.

Asked if he felt he needed to make his case to athletic director Debbie Yow to keep his job, Gottfried declined.

The bigger Tar Heels towered over N.C. State in nearly every phase of the game Wednesday night.

Gottfried had nothing but praise for the Tar Heels.

"I thought North Carolina tonight looked like an experienced veteran basketball team tonight and that's what good teams, experienced teams do," Gottfried said. "I thought right at the first half we got it down to six, and Dennis might have hit a shot, I don't remember exactly but we got it down to six. Then I don't remember the exact run but Berry made a three, Jackson made a three, bang-bang, and they seemed to have an answer for everything we did."

Roy was asked what he said to Gottfried after: "That's between me & Mark. I'm not trying to be rude but some things don't have to be shared"

"Like Coach (Roy Williams) always said: we control our destiny," said Joel Berry II, who scored 18 points. "And if we want to be the top team at the end of the season, it's all on us. I think everyone on this team realizes that and that's why we had such great practices coming into this game."

The Tar Heels finished with a 60-22 edge in points in the paint, a 41-25 rebounding advantage and 27 second-chance points - a strong follow to last month's 107-56 win against the Wolfpack that stood as the second-worst loss in N.C. State's history.

RoyW on NC State: "Feel for them, they're going through some tough times." #abc11

"We knew it was going to be a battle," said Theo Pinson, who had 12 points on 6-for-8 shooting while starting for injured Kenny Williams III. "I'm glad we punched them in the mouth early and just kept it going."

"He's got a right knee injury. He'll have surgery early next week and he is probably out for the season," Coach Williams said. "He hurt his knee. It's a crazy thing, but it's not an ACL or anything like that. It's four to six weeks, but when you look at four to six weeks at this point in the year, it's basically the end of the season."

"It was one of those kind of things where we thought we would have an advantage inside," UNC coach Roy Williams said. "And we wanted to make than an important part of the game like we've tried to do all season."

Dennis Smith scored 27 points in one of the few bright spots for the Wolfpack.

Freshman Dennis Smith Jr. scored 27 points but little else went right for the Wolfpack (14-13, 3-11), who continued their accelerating descent that had Gottfried greeted by a smattering of boos during pregame introductions.

"It's no excuse to lose any game, regardless of what's going on," Smith said. "I want to win every game and it's not happening. So I'm very disappointed."

Picked to finish sixth in the 15-team league, the Wolfpack sits ahead of just one team in the standings with four regular-season games left. And since earning its first win at Duke's Cameron Indoor Stadium since 1995, N.C. State has lost six straight games - four coming by at least 24 points.

The Tar Heels have won 21 of 23 meetings against N.C. State. It was also a solid bounce back coming six days after a loss at rival Duke. The Blue Devils, incidentally, won their sixth in a row Wednesday night with a 65-55 win at Virginia. They haven't lost since being stunned at home by the Wolfpack -- who haven't won a game since.

The season that started with potential has crashed at N.C. State.

"Everything that happens is my responsibility," Gottfried said. "That's part of the turf as a head coach. Just like if you beat Villanova in the NCAA Tournament or go to the Sweet 16, you get a lot of praise a lot of times as a coach, other times you take the hits."

N.C. State followed Saturday's 30-point loss at bubble team Wake Forest with another performance filled with bad defense, enough that the Tar Heels had emptied their bench with the team up 93-64 with 2 minutes left - and a chant of "Tar! Heels!" coming from a section of red seats upstairs.

The Tar Heels have a big ACC game Saturday at home against No. 14 Virginia. N.C. State hosts No. 25 Notre Dame on Saturday.

"Once again, we did not do a great job on the defensive glass, they got like 18 offensive rebounds," Smith said. "That's been the Achilles' heel for us all season. We got to improve on it pretty late in the ACC and that's something that we should have fixed. We're just looking forward to Saturday now."