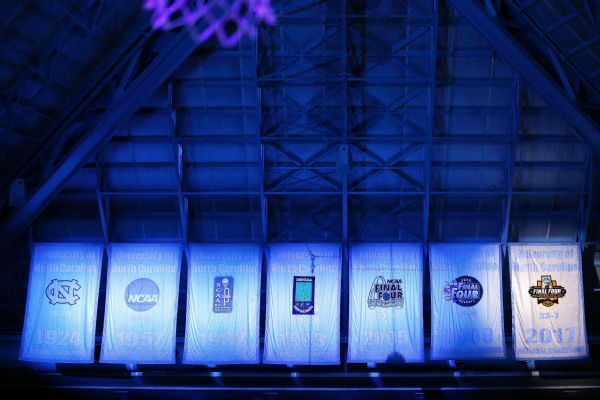 The school unveiled its 2017 NCAA championship banner during its annual "Late Night With Roy" event filled with jokes, dancing and a public scrimmage. It was part of a busy schedule that included Kentucky's "Big Blue Madness" -- where the Wildcats showed off their latest crop of star freshmen -- as well as events at Louisville, Florida State, Georgetown and Iowa State among others in what amounts to a ceremonial start to the season.

North Carolina's event, drawing an estimated 21,000 fans to the Smith Center, came on a big day for the school. On Friday morning, the NCAA announced an infractions panel had determined it "could not conclude" there were academic violations in a multiyear scandal focused on irregular courses featuring significant athlete enrollments across numerous sports, including men's basketball.

Before Friday, it was unclear whether the NCAA would penalize UNC athletic programs.

"We're just glad it's over," junior Luke Maye said. "Coach [Roy Williams] has just continued to preach to us the past two years, and now it's behind us and we're just moving forward."

The festive vibe in Chapel Hill included loud cheers for returning Final Four Most Outstanding Player Joel Berry II and the amusing sight of watching current players trying to recreate famous shots by past Tar Heels -- most notably by struggling to hit Michael Jordan's title-winner against Georgetown in 1982.

Then there was Maye's last-second jumper to beat Kentucky and reach last year's Final Four. Maye tried his own shot and missed -- twice.

Here's a look at some of the Midnight Madness-style events Friday:

KENTUCKY: Rap star Drake made an appearance and served as an honorary coach during the team scrimmage. Drake first appeared at "Big Blue Madness" in 2009, coach John Calipari's first season at Kentucky.

LOUISVILLE: Louisville's scrimmages are more straightforward and low-key, but this one was intriguing because it was the Cardinals' first appearance without longtime coach Rick Pitino -- who has been on unpaid administrative leave since Sept. 27 as a result of the school's involvement in a federal investigation of the sport. Interim coach David Padgett received a standing ovation from a lower-arena bowl that was about 75 percent full, and also visited briefly with Hall of Famer and former Louisville coach Denny Crum.

FLORIDA STATE: Florida State held its annual Jam with Ham at Tully Gym, where the team played before moving into the Tucker Center in 1981. The night featured coach Leonard Hamilton donning an Afro and bell bottoms to go with the 1970s feel.

"We love the throwback thing, going over to the old gym they used to play in. The idea of playing some of the music they played back in and put on the costumes, the fans get caught up in it," Hamilton said, adding: "The scrimmages take on more of a Harlem Globetrotters vs. Washington Generals feel than I like, but it's all in good fun."

HARVARD: Harvard used the occasion to unveil the $12 million renovation of the basketball arena, which was originally built in 1926. The new facility includes a new floor, press box, video boards, air conditioning and locker rooms and offices for the men's and women's teams. It also attracted a notable visitor in Boston Celtics first-round draft pick Jayson Tatum -- a Duke product like Harvard coach Tommy Amaker -- to watch from a courtside seat.