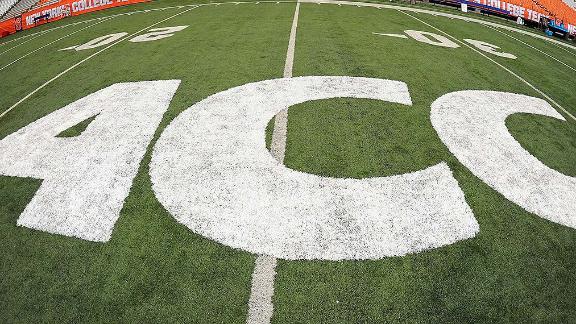 The North Carolina Tar Heels and Wake Forest Demon Deacons have achieved a scheduling first: The ACC schools announced Monday they have agreed to a home-and-home nonconference series in 2019 and 2021.

This is the first time two Power 5 teams from the same league have agreed to face each other in nonconference play. The games will not count in the league standings.

"This is a unique opportunity to play a regional rival in years that fall outside the normal conference rotation," North Carolina athletic director Bubba Cunningham said. "We have a long history with Wake Forest that has historical value and will generate interest within our fans."

North Carolina and Wake Forest are in separate divisions in the ACC and no longer play annually. Because of that, the two have only met four times since 2004.

Rather than wait seven years until their next game, the two sides agreed on the nonconference series. Last year, ACC athletic directors began seriously discussing the idea of setting up nonconference games against league teams in the opposite division for two reasons: to avoid going so many years between games and to add another Power 5 opponent to the schedule.

Currently, each ACC team plays one designated rival from the opposite division plus one more crossover opponent that rotates yearly.

The teams will play their nonconference games in Winston-Salem on Sept. 14, 2019, then in Chapel Hill on Sept. 25, 2021. The programs still have the third-oldest rivalry in the ACC with 105 previous meetings.

"Because of the ACC schedule, we do not have the opportunity to play North Carolina as regularly as we have in the past," Wake Forest athletic director Ron Wellman said in a statement. "These are two teams that played the very first college football game in this state over 125 years ago. We felt it made perfect sense to continue this rivalry and allow fans of both schools to enjoy playing a traditional opponent."