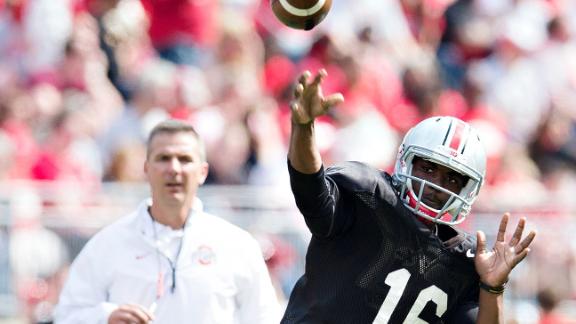 But as the Buckeyes start digging into the game plan for their opener now that Braxton Miller officially will miss the coming season, they are planning on redshirt freshman J.T. Barrett stepping into the considerable shoes of the two-time defending Big Ten Offensive Player of the Year at the start.

"J.T. has had about 300 competitive throws -- not snaps, throws -- this fall," Meyer said after practice Wednesday. "Where when [former backup] Kenny Guiton went into the game a couple years ago, I think he had six. He's had a bunch, and he's a meticulous guy, and Cardale [Jones] has come a long way, as well.

"Quarterback is an important cog, but that's exactly what is -- a cog. It's not the team."

Miller was undoubtedly the centerpiece of a team that was projected as a playoff contender, and replacing his prolific production is no small task. Barrett, though, has been widely praised for his accuracy, his attention to detail off the field and enough athleticism to continue to give the Buckeyes a rushing threat at quarterback even without Miller in the fold.

Meyer didn't rule out playing Jones at times, as well, and the coach has had success with a two-quarterback system in the past -- including during his run to a national title with the Florida Gators with quarterbacks Chris Leak and Tim Tebow. But after Meyer moved Barrett ahead of Jones on the depth chart Saturday -- just two days before Miller suffered another injury to his shoulder -- the first-team work as the attention shifts fully to Aug. 30 and Navy will belong to him.

The Buckeyes also may have to tweak the offense some to play to the strengths of Barrett, who has a slightly different skill set than Miller.

"That's all still to be determined, but if I knew it I probably wouldn't tell you anyways because we're playing the season here pretty soon," Meyer said. "The best quarterbacks are great distributors, and I watch Peyton Manning and I'm in awe of the way he distributes the ball. I thought Kenny Guiton was one of the best I've been around as far as getting the ball out quickly and distributing to playmakers and letting them run with the ball, let them make plays. That's what my initial evaluation of J.T. is, he's very good at that."

Whether the job ends up being Barrett's alone or one he'll share with Jones, Miller's replacement should benefit from a deeper cast of skill players than the Buckeyes have had the previous two seasons under Meyer.

Veteran receiver Devin Smith, tight end Jeff Heuerman, hybrid weapon Dontre Wilson and a talented pool of tailbacks led by Ezekiel Elliott and freshman Curtis Samuel are all still healthy and ready to contribute, meaning the high expectations at quarterback remain intact regardless of who is taking over the reins.

"[Expectations] haven't changed honestly," Heuerman said. "We've just got to compete for championships. The nice thing about it is we don't have any huge kicker games, so it will give us some time to get our feet wet before we jump into the Big Ten schedule.

"It's kind of nice the way it's set up, so we'll have some time to work out the kinks and stuff. I'm sure there will be some -- there are every year -- but we're looking forward to it."

With Miller officially ruled out and the Navy opener creeping up, the Buckeyes also have no time to look back.