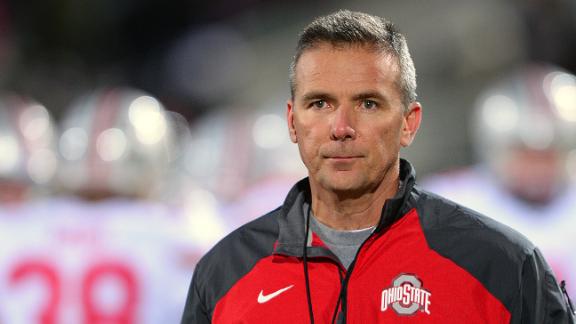 COLUMBUS, Ohio -- All three decorated Ohio State quarterbacks were back in uniform for the first time since August, but a historically loaded competition for the starting job hasn't technically started just yet.

Braxton Miller went through warm-ups and did some running with the Buckeyes, his first on-field work since season-ending shoulder surgery during training camp in the fall.

J.T. Barrett was able to throw but continues to be limited in other drills as he recovers from a fractured ankle suffered during the final week of the 2014 regular season.

While that leaves Cardale Jones healthy and able to take the reps with the first-team offense for the reigning national champion, Ohio State coach Urban Meyer isn't close to making a decision about his starting quarterback after opening spring practice Tuesday morning.

"Each player, each day is separate," Meyer said. "Today was all about Braxton continuing on his journey to get healthy, which he's done an excellent job. ... Obviously J.T. is a guy who had a leg injury; he's doing a little bit more than I thought he could, so he went through mini-field [reps]. We want to keep pushing him and get him healthy.

"And Cardale is getting more reps than he's ever gotten. It's day to day. How does it play out? I don't know."

The Buckeyes have plenty of time to figure it out, starting with 14 more practices in March and April and continuing with summer workouts and then training camp after that.

All three quarterbacks should be able to compete without limitation by August, and Meyer will eventually have a difficult decision to make -- albeit one that is perhaps the envy of college football.

Miller was the two-time defending Big Ten Offensive Player of the Year before suffering a second injury to his throwing shoulder just before his original senior season was set to begin.

After being thrust into the lineup, Barrett won Big Ten Quarterback of the Year honors and finished fifth in the voting for the Heisman Trophy. After he was lost to injury, Jones stepped in and won all three postseason games for the Buckeyes on the way to the national championship.

Without a level playing field for now, though, Meyer doesn't have to settle on a depth chart. That leaves Ohio State to evaluate them all on different scales, adding to the intrigue around such a loaded position where only one guy can play at a time.

"I think it's unique," Meyer said. "At that position, I've never had it like that. I've had it at other positions where all of a sudden you have three or four really good receivers, but you play more than one at a time.

"I think at some point there will be some [pressure] because of the great respect I have for those three guys. ... But there's not right now. We're not even focused on that. I just want to see [Miller] get healthy, J.T. get healthy and Cardale continue to improve."