U.S. scores statement win over Argentina to move into semis 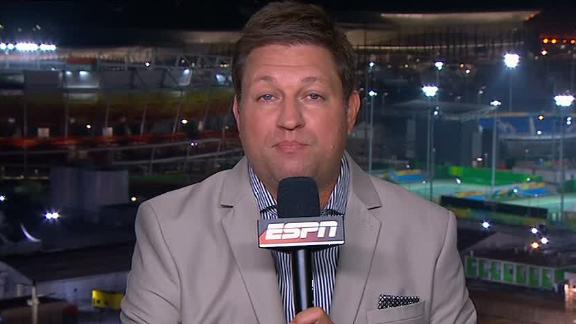 So did a golden era of international basketball.

Emphatically stopping a stretch of three straight close games, the Americans advanced to the semifinals by sprinting past Manu Ginobili and Argentina 105-78 on Wednesday night.

In front of a chanting, flag-waving crowd of Argentines who came to throw a raucous farewell party for their Golden Generation, the Americans delivered their most complete performance in Rio.

"What a remarkable run by Argentina and so we knew we had to match that energy tonight. I thought we did," U.S. coach Mike Krzyzewski said.

Turning a slow start into an early ending with a 27-2 run in the first half, the Americans put away one old rival and set up a meeting with another. They will play Spain on Friday in a rematch of the last two gold-medal games.

Kevin Durant scored 27 points for the Americans, who had played three straight close games for the first time under Krzyzewski, setting off a round of questions at home and in Rio de Janeiro about what was wrong with them.

The answer might be nothing. At least there wasn't against Argentina.

"We wanted to come out and our whole thing was dominating," forward Carmelo Anthony said.

The Americans eliminated Argentina for the third straight Olympics, this time ending not only a tournament run for the Argentines but also a couple of careers.

Ginobili, 39, and longtime teammate Andres Nocioni, 36, retired from international competition after the game, 12 years after winning gold in Athens.

"We had a chance to grow up together and do some good things, win some games together. It was fun. It's a lot of years," said Luis Scola, who is also 36 but plans to keep playing. "We formed part of something unique we did for our country and it's going to be there. Sometimes we're not going to win, like today. Sometimes we won but we fought together for many years."

Ginobili scored 14 points in his final game in Argentina's blue and white, tearing up after receiving applause from his fans and warm wishes from his opponents.

"They congratulated me and I'm very proud of their words," Ginobili said. "They were very kind, very respectful and when legends of the game showed their respect, it has an extra value."

The Americans have won 23 straight in the Olympics since Argentina beat them in the 2004 semifinals, and this was how they usually do it: too much firepower, too much defense and way too much talent.

It took a little while to get going, as Argentina opened a 10-point lead. The Argentines made nine of their first 10 shots inside the arc and led 19-9 when Nocioni drilled a 3-pointer. But the Americans finished the first period with a 16-2 run, getting the final six points from DeMarcus Cousins, to take a 25-21 edge to the second.

Three-point plays by Cousins and Jimmy Butler around Durant's 3-pointer in an 11-0 start to the second made it 36-21 before Facundo Campazzo stopped the onslaught with a three-point play.

Cousins, the normal starting center playing as a reserve, finished with 15 points.

The loudest crowd yet for a U.S. game, featuring boxer Floyd Mayweather and NBA commissioner Adam Silver, was treated to an explosive performance by the Americans, with devastating crossovers by Durant and Kyrie Irving that left defenders helpless and brought teammates to their feet on the bench.

They opened a 25-point lead in the first half and were in control from that point, the first time since their second game in Rio they had it easy.

"We fed off wanting to play better than the last three games," Durant said.

Ginobili, Scola, Nocioni and Carlos Delfino, the remaining Golden Generation players, checked in together for a last run with about 4 minutes left. Argentina fans danced, cheered and completely ignored the crooked numbers on the scoreboard while saying one long goodbye.

Ginobili was replaced a few minutes later, hugging teammates, coaches and after the game Krzyzewski, before returning to the court after the teams had headed to their locker rooms to be presented a game ball by an Olympic official.

Even Argentina's proud veterans didn't consider themselves medal contenders, especially after the Americans blew them out 111-74 in an exhibition game last month in Las Vegas and came to Rio as the overwhelming favorite.

But once play began, the U.S. rarely played up to those expectations, with one narrow victory after another as the competition toughened. The Americans held off Australia by 10, then pulled out three-point victories over Serbia and France.

They were finally in top form Wednesday.

Now they have to stay there for two more games.