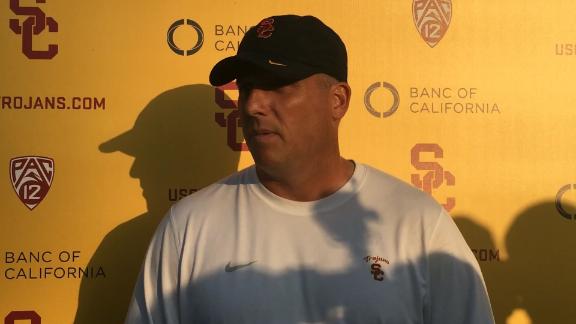 Bartlett would not confirm any specific details about the investigation in Utah, only that a search warrant was served to Masina on campus at USC last week.The alleged incident happened last month, before Masina reported to USC training camp, Bartlett said.

The Los Angeles Police Department did not immediately reply to an inquiry seeking more information about the California-based investigation. Bartless said that alleged incident happened prior to the Utah one.

Masina's family has retained Salt Lake City-based attorney Greg Skordas, who confirmed there are two incidents being investigated and that Masina remains in Los Angeles.

"What was taken (during the search) I can't talk about, but apparently they are going to do their investigation based on that search warrant," Skordas said.

The only discipline Masina has faced, as of Tuesday afternoon, has come from the athletic department, Skordas said. He will not travel with the team for Saturday's game against Alabama in Arlington, Texas.

A sophomore inside linebacker, Masina is listed at No. 2 on USC's depth chart. He made 25 tackles in 12 games last year.

"USC is aware of the investigation involving student-athlete Osa Masina," the school said in a statement. "USC is cooperating fully with authorities in Utah, the lead agency in the investigation. Due to privacy laws and to protect the rights of our students, we are not able to discuss this matter further."

Helton, asked about Masina on the weekly Pac-12 teleconference, said he was aware of the investigation but could not discuss it because of privacy laws.
Related topics:
sportsespnosa masinausccollege footballsexual assaultlapdusc trojans
Copyright © 2020 ESPN Internet Ventures. All rights reserved.
More Videos
From CNN Newsource affiliates
TOP STORIES