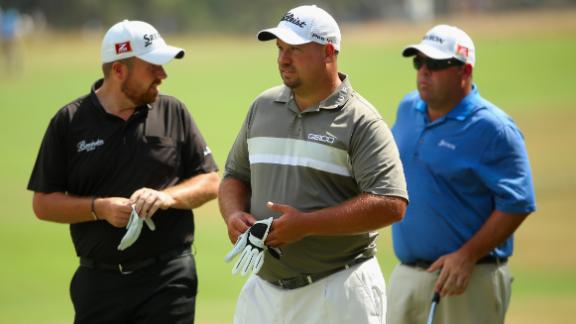 Thursday's afternoon trio at the U.S. Open of Kevin Stadler, Brendon de Jonge and Shane Lowry carried expectations tied to some degree with the USGA's tradition of having fun with the grouping process.

Reportedly deemed "The Heavyweights" by Stadler's caddie, the USGA wouldn't fully acknowledge their size played a role in their grouping.

But Jeff Hall, the organization's managing director of rules and competitions, didn't deny it when discussing it with GolfChannel.com.

"There are some themes, you know," Hall told the website. "There's a fair amount of leeway."

Hall hesitated when pressed further, saying he had "to be careful. We have some fun."

Lowry, who shot a 73 on Thursday, wasn't pleased with the apparent "fun."

"When I saw it, I was pretty annoyed," said Lowry, listed as the lightest among the three according to GolfChannel.com at 225 pounds, though he said he's lost nearly 20 in six months. "I think it's very cheeky of the USGA to do what they've done. I don't think it's fair to the three of us. It's a mockery, to be honest."

Stadler, who opened with a 77, called the USGA "a little mean and insensitive" with a 5-year-old's sense of humor. But he also said he didn't care, adding that he was expecting it because it has happened to him before at the U.S. Open.

"It's not like I don't pretend that I'm not (overweight)," said Stadler, officially listed at 250 pounds.

With a 68 at Pinehurst No. 2, he stood tied for second with three others, three shots behind first-round leader Martin Kaymer.

"I was actually pretty amused by it," de Jonge said, according to GolfChannel.com. "I wasn't offended at all."