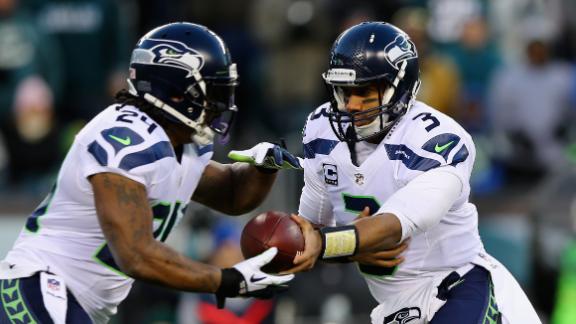 The MGM, Caesars, Westgate, Golden Nugget, South Point, Station's and CG Technology sportsbooks moved the line from New England minus-1 to pick 'em Saturday, as money poured in on the Seahawks. Most books reported still having more money on thePatriots, but the gap was narrowing.

"We're taking more bets on the Patriots, but the more substantial money has been on the Seahawks," Jason Simbal, vice president of risk for CG Technology, said Saturday. "What we've been seeing lately is for every two-, three-, four- or five-hundred dollar bet that comes in on New England, we'll then take a five-figure bet on Seattle."

The MGM, which took a seven-figure wager on the Patriots last week, was one of the last Vegas books to move the line to pick 'em Saturday.

MGM vice president of race and sports Jay Rood said the seven-figure transaction was handled in advance with the funds being transferred to the casino cage. He would not elaborate on the identity of the bettor, who spared no expense.

That was the lone seven-figure wager reported by the books as of Saturday night, but Rood said his shop has already taken "a lot" of six-figure wagers, the majority of them on the Patriots. More big bets will undoubtedly show up Sunday.

CG Technology, which is known to cater to some of the biggest players in Vegas, including professional sports bettor Billy Walters and boxing champion Floyd Mayweather Jr., also was expecting large wagers to arrive today.

"We're not going to comment on individual customers," Simbal said, "but we're still waiting to see what other high rollers want to do."

The Wynn and Stratosphere sportsbooks still had the Patriots favored as of Saturday night. Wynn sportsbook director John Avello said two times more money had been bet on the Seahawks than the Patriots at his shop. He took multiple six-figure bets on Seattle on Saturday. But the Wynn was an outlier.

The vast majority of books were rooting against the Patriots heading into Sunday.

"I believe most Nevada bookmakers will be Seattle fans on Sunday," Station's sportsbook director Art Manteris said. "I almost certainly will be."

Before Saturday's line movement, the Super Bowl point spread had held steady at New England minus-1 for two weeks. Most books opened the line at Seattle minus-2.5 on championship Sunday, but the number quickly moved in favor of the Patriots.

Sportsbook operator William Hill was one of the only shops to keep the point spread at pick 'em for the past two weeks. William Hill reported Saturday night that 62 percent of the money wagered at its shops was on the Patriots. There has never been a Super Bowl with a consensus closing line of pick 'em.

The San Francisco 49ers were favored by one point over the Cincinnati Bengals in Super Bowl XVI in 1982. The Miami Dolphins were 1-point favorites over the Washington Redskins in Super Bowl VII in 1973.

"If anything, I'd say it moves to Seattle [minus] one," Westgate head football oddsmaker Ed Salmons said.

The Super Bowl over/under total also has been on the move. After opening as high as 49.5, the total was down to 47.5 at most sportsbooks.

Who Has The Advantage In Super Bowl XLIX?
Eric Allen breaks down the advantages for the Seahawks and Patriots going into the Super Bowl.