Velasquez vs. Werdum at UFC 188 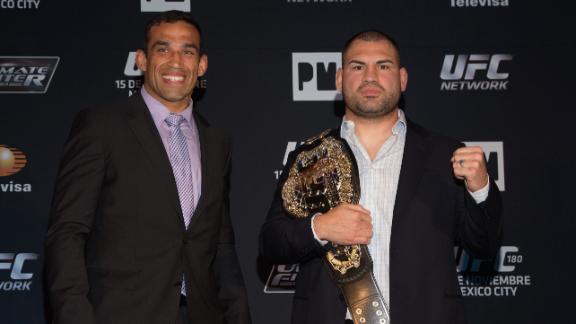 It is the second time UFC has booked the matchup to this arena. The two were supposed to square off in UFC's Mexico debut in November, but Velasquez was forced to withdraw from the event with a sprained MCL and torn meniscus. Werdum went on to defeat late-replacement Mark Hunt via TKO for the interim heavyweight title.

Velasquez (13-1) has not fought since a dominant knockout victory against Junior dos Santos at UFC 166 in October 2013. The champion suffered a torn labrum in the fight and underwent shoulder surgery in late 2013.

Fighting out of American Kickboxing Academy, Velasquez has won four consecutive bouts and recorded two title defenses. ESPN.com ranks Velasquez as the No. 6 pound-for-pound fighter in the world.

Werdum (19-5-1) will carry a five-fight winning streak into the summer title fight. The 37-year-old Brazilian has enjoyed a career resurgence since UFC released him in late 2008. Since that release, Werdum is 8-1.

Working alongside Rafael Cordeiro at Kings MMA in Southern California, Werdum has evolved into a dangerous stand-up fighter, registering knockouts in two of his last four bouts.