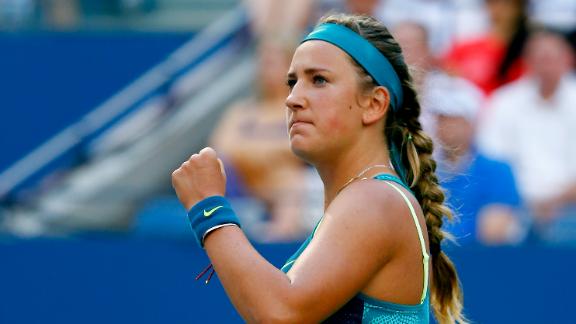 NEW YORK -- There is a growing feeling here that the greatest threat to Serena Williams' seemingly imminent calendar-year Grand Slam is Victoria Azarenka.

On a pleasant Saturday afternoon at the National Tennis Center, Azarenka, the No. 20 seed, defeated No. 11 Angelique Kerber of Germany in a spectacular third-round match 7-5, 2-6, 6-4.

The grinding confrontation ran 2 hours, 52 minutes. Kerber saved five match points in the ninth game of the final set of what might have been the best women's match of the tournament so far.

Azarenka said she felt the match was good for women as well as women's tennis.

""I think it's great for our sport to be able to produce this kind of high-quality match," she said. "I think it goes beyond tennis. It's just in general in life, women have to always prove a little bit more. In business, in other sports.

"But, you know, I just want to show it on the court and not talk about it. I think today everybody saw what's been happening out there. I hope they can appreciate that."

During the changeover before she closed the match out, Azarenka reviewed handwritten reminders tucked in her racket bag.

Which one resonated the most?

"Pinish," Azarenka said in her on-court interview. "That's one word [hitting partner] Sascha [Bsajin] uses a lot. It's a combination of finish and punish."

While there are still formidable obstacles ahead of Williams -- Madison Keys in a Sunday fourth-round match and, potentially, sister Venus in the quarterfinals -- Azarenka looms as the favorite to clear the bottom half of the draw and meet Serena in the final.

She almost didn't get to the fourth round.

With Kerber serving for the first set at 5-3, Azarenka showed patience and resilience in saving set points and weathering a grueling six-deuce game to break back. She picked up a desperate drop shot and ripped a backhand cross-court shot for the critical winner. Azarenka won the last four games of the frame.

Kerber won the second set, but Azarenka broke her to open the third and, amid much screaming and yelling, managed to make that lead hold.

Azarenka is the only player to take two sets from Serena in this season's march toward the Grand Slam, losing in three sets in the third round at Roland Garros and in the quarterfinals at Wimbledon.

Azarenka next plays Varvara Lepchenko, an unseeded American who reached the fourth round here for the first time in her career. Lepchenko beat Mona Barthel of Germany 1-6, 6-3, 6-4 and is the only American still alive in the bottom half.