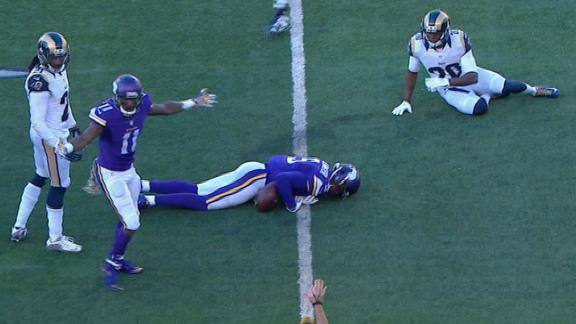 ESPN
By Ben Goessling
MINNEAPOLIS -- Vikings quarterback Teddy Bridgewater was diagnosed with a concussion Sunday after being elbowed in the head by Rams defensive back Lamarcus Joyner in the fourth quarter of Minnesota's 21-18 victory.

Bridgewater, who was seen walking around the locker room after the game, will have to go through the NFL's concussion protocol.

Bridgewater suffered the injury while sliding for a 5-yard gain with 13 minutes, 36 seconds left in the fourth quarter. He remained face down on the field for several seconds after the hit from Joyner, who came in after Bridgewater had already begun his slide.

Vikings coach Mike Zimmer said the Rams crossed the line on several hits but would not comment specifically on Joyner's hit to Bridgewater.

"It was a hard-fought ballgame," Zimmer said. "I know we played clean on our side of the ball."

Bridgewater had taken a low hit from William Hayes on the Vikings' previous drive, but referee Ron Torbert didn't call a penalty with Bridgewater outside the pocket. After the Joyner play, Zimmer ran out onto the field to scream at officials for the hit.

Bridgewater ran to the locker room with trainers as Vikings backup quarterback Shaun Hill came in to face his former team in the fourth quarter.

Before the hit, Bridgewater was 13-for-21 for 144 yards and an interception, and he had carried three times for 17 yards and a touchdown. He'd also run for a two-point conversion, giving the Vikings an 18-15 lead.

"If we were out in the street, we probably would've had a fight," Zimmer said. "There is a history there with their defensive coordinator."

Bridgewater suffers concussion after hit to head
Vikings QB Teddy Bridgewater is hit in the head by Rams DB Lamarcus Joyner while sliding for a five-yard gain in the fourth quarter.

AP on hit on Bridgewater: How do you miss that one?
Adrian Peterson talks to ESPN's Josina Anderson about the call after CB Lamarcus Joyner's hit on Teddy Bridgewater that knocked him out cold and whether he thinks the QB will play against the Raiders.
Related topics:
sportsespnlamarcus joynershaun hillminnesota vikingsnflteddy bridgewaterst louis rams
Copyright © 2020 ESPN Internet Ventures. All rights reserved.
More Videos
From CNN Newsource affiliates
TOP STORIES