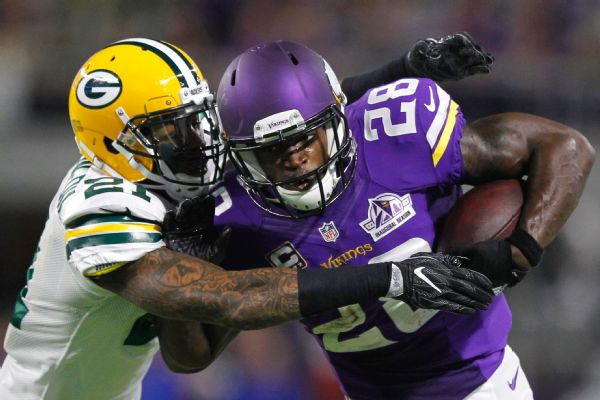 Adrian Peterson, who underwent surgery to repair a right lateral meniscus tear on Sept. 22, is making solid progress in his recovery and could be back on the field for the Minnesota Vikings by mid-to-late December, according to league sources.

Peterson had an exam late last week and could start running this week. Although the three-time rushing champion is said to be exercising caution in his return from the knee injury he sustained on Sept. 18 against the Green Bay Packers, he could make his return before the end of the regular season.

If Peterson stays on track, two possibilities for his return could be a home game against the Indianapolis Colts on Dec. 18 or the Vikings' rematch against the Packers at Lambeau Field on Dec. 24 -- five years to the day since Peterson tore his left ACL against the Washington Redskins. The running back returned from that injury in less than nine months, winning NFL MVP honors with a 2,097-yard season and establishing his reputation as a quick healer.

The Vikings waived Ronnie Hillman on Monday, adding defensive end Stephen Weatherly to their active roster. The move left them with just Jerick McKinnon and Matt Asiata at running back, but an eventual Peterson return would change the dynamics of the Vikings' offense.

"He's a workaholic," cornerback Captain Munnerlyn said Monday. "I definitely wouldn't put anything past this guy. He's a fast healer. His makeup is definitely a fighter. We'll see. I think [he'll be back], but at the same time, you never know. That's a tough injury to come back from. He's got to think about his career, but he's a guy that wants to come out there and help the team win. One thing is on his mind: He wants to win that Super Bowl. So he feels like if he can come back and definitely contribute to us winning, he definitely will do it."

Super Bowl LI will be played on Feb. 5 in Peterson's adopted hometown of Houston. Before working out at his gym in Houston in June, Peterson told ESPN, "When they brought it out like, 'Hey, this one will be in Houston' -- in 2017 -- I was like, 'OK.' Last year I was like, 'OK, wasn't meant to happen. God, he wants me to come back home to accomplish that.' So that's been my mindset."
Related topics:
sportsespnminnesota vikingsinjured reservenfladrian petersonmeniscusvikesirsurgery
Copyright © 2022 ESPN Internet Ventures. All rights reserved.
TOP STORIES
In video, 'angry' NC Gov. Cooper pushes for stronger gun laws
Timeline breaks down Uvalde shooter's movements day of massacre
TX school shooting leaves at least 19 children, 2 adults dead
Columbine survivor reacts to Texas elementary school shooting.
Person County Habitat for Humanity looking for volunteers
Wake County educator weighs in on gravity of another school shooting
Should you talk to young kids about mass shootings? And how?
Show More
NC schools use tool made after Sandy Hook shooting to protect students
Former Capital Cities/ABC Chairman and CEO Tom Murphy dies at 96
NC Medicaid expansion closer to reality as Senate leader shows support
Wake County moms demand change after Texas elementary school shooting
George Floyd's family continues to advocate for change 2 years later
More TOP STORIES News