Vitor Belfort a go for UFC 181 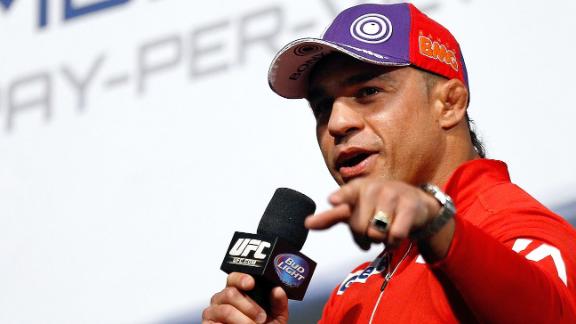 The ruling clears the way for a middleweight title bout between Chris Weidman and Belfort at UFC 181 in Las Vegas on Dec. 6. Officials confirmed the bout to ESPN.com.

The commission approved the license under the following conditions:

• Belfort, 37, is not to appear in a professional fight prior to December.

• The fight must take place in Nevada.

• He is subject to the NSAC's enhanced drug-testing program at all times.

Commissioner Anthony A. Marnell made it clear to Belfort, who tested positive for anabolic steroids in Nevada in 2006, that the NSAC intends to test him for the remainder of his career. Belfort or his promoter must handle the cost of those tests.

"We're going to drug-test you until the day you retire," Marnell told Belfort. "That's my definition of reasonable. Not every day, week or month, but we, in my opinion, need to be in and around your career until the day you call it quits."

The Brazilian, who appeared in person before the commission, responded: "Whatever you guys request, I will cooperate fully."

Belfort (24-10) was scheduled to challenge Weidman for the title in May but was pulled from the bout after the NSAC banned testosterone-replacement therapy in combat sports in February. According to Belfort's lawyer, Michael G. Alonso, Belfort received permission to use TRT previously from commissions in Pennsylvania, Ontario and Brazil.

On Feb. 7, Belfort submitted a random blood test to the NSAC that showed his level of serum testosterone was above "normal ranges." Belfort said the spike was due to the fact he was traveling and took a higher injection the day before the test.

Belfort, who says he started using TRT in 2011, stated this is the only time his levels have tested high. He has published certain test results trying to prove that in 2014.

Belfort said he stopped using TRT in February. According to lab reports from a test taken May 29, Belfort's serum testosterone levels were low on that date. Belfort admitted to the NSAC that it was initially difficult to come off TRT but told ESPN.com that he has not been prescribed any medications as he discontinues use.

"I'm taking a prescription every day called the Holy Spirit," Belfort said. "Praying and training. It's called work ethic. I cannot teach you that. You have it or not."

Belfort earned his way to a title shot with three consecutive knockout wins in 2013. All three fights took place in Brazil. In his most recent fight, he knocked out Dan Henderson in just 77 seconds in November.

After Belfort was pulled from the May bout, Weidman (12-0) was booked to a title defense against Lyoto Machida at UFC 175 on July 5 in Las Vegas. Weidman won that fight via unanimous decision.