Warriors favored over Cavs in Vegas to win NBA championship 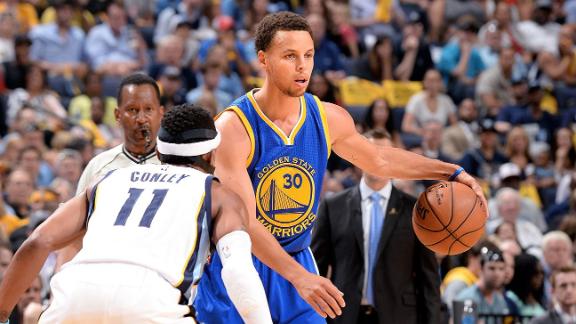 The Golden State Warriors have emerged as the odds-on favorites to win the NBA title.

Heading into the conference finals, the Warriors are 4-7 favorites to win the championship at the Westgate Las Vegas SuperBook. The Cleveland Cavaliers are next at 5-2, followed by the Atlanta Hawks at 8-1 and the Houston Rockets at 12-1.

Golden State is a giant minus-1,100 favorite to eliminate the Rockets in the Western Conference finals, which tip off Tuesday (9 p.m., ESPN) at Oracle Arena. The underdog Rockets are plus-700 to pull off the upset.

The Warriors are 10-point favorites in Game 1. They defeated Houston in all four meetings this season by an average of 12.75 points, but the Rockets have proven to be a dangerous out.

Trailing the Clippers 3-1 in a best-of-seven series, Houston was 60-1 to win the NBA title at the SuperBook. The book took one bet on the Rockets at that price -- one $1,000 bet.

In Game 7 on Sunday, the Rockets were 2.5-point home underdogs to the Clippers. An hour before the game, the SuperBook reported that 82 percent of the money wagered on Game 7 was on Los Angeles. Houston won 113-100.

In the Eastern Conference finals, the Cavaliers are minus-210 favorites over the Hawks, who own home-court advantage. Atlanta is a 1-point favorite over Cleveland in Game 1 on Wednesday at Philips Arena. Cavs point guard Kyrie Irving (left knee tendinitis, strained right foot) is questionable for Game 1.