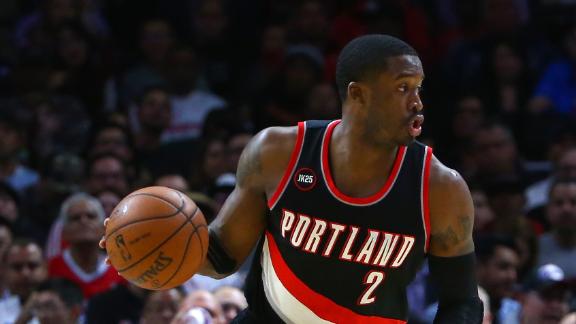 Portland Trail Blazers free-agent swingman Wesley Matthews has committed to sign with the Dallas Mavericks later this month, according to league sources.

Matthews has verbally agreed to join the Mavericks after turning down what sources told ESPN.com was a mammoth four-year, $64 million offer from the Sacramento Kings.

Matthews' looming deal with Dallas can't be signed until July 9, when a leaguewide moratorium on roster business is lifted.

Matthews visited Sacramento on Thursday for a sit-down with Kings officials, then informed them Thursday night that he was passing on the offer, which sources say is richer than what Dallas has pitched.

Sources say the Kings offered an annual salary of $16 million -- $1 million higher per season than Matthews was originally seeking -- despite the fact that the 28-year-old suffered a season-ending Achilles injury in March and will join the Mavs without having been able to test his surgically repaired left foot in game conditions.

Despite the injury that cost him the final 22 games of Portland's season, Matthews was chased hard by the Toronto Raptors in addition to Sacramento and Dallas.

Known as a top-flight perimeter defender and a prolific 3-point shooter, Matthews averaged 15.9 points per game last season. He made it known in league circles heading into free agency he would be seeking in the neighborhood of $15 million per season despite the fact he is only four months into his recovery.

ESPNDallas.com's Tim MacMahon reported earlier this week that the Mavs are reluctant to meet Matthews' price considering the daunting history of players who have been felled by a torn Achilles tendon.

Sources told MacMahon that the Mavs would want to sign Matthews to a deal averaging in the $10-12 million range.

But the thinning market of shooting guards in free agency has created some leverage for Matthews. Chicago's Jimmy Butler, Milwaukee's Khris Middleton, San Antonio's Danny Green and Cleveland's Iman Shumpert all agreed to long-term deals with eight-figure annual salaries to stay with their current teams during the first day of free agency.

Mavericks small forward Chandler Parsons, who has been operating as the team's lead recruiter, has spent considerable time in Los Angeles in recent days with both Matthews and Jordan. MacMahon reported this week that the trio has had multiple conversations about the chance to play together in Dallas.

Mavs coach Rick Carlisle and team athletic trainer Casey Smith had a dinner meeting with Matthews in Los Angeles minutes after free agency officially opened Tuesday night. Smith's reputation, after his work in both Phoenix and Dallas and with Team USA, is thought to be one of the lures of Dallas for Matthews.