What has changed in college basketball over the past month, and what hasn't 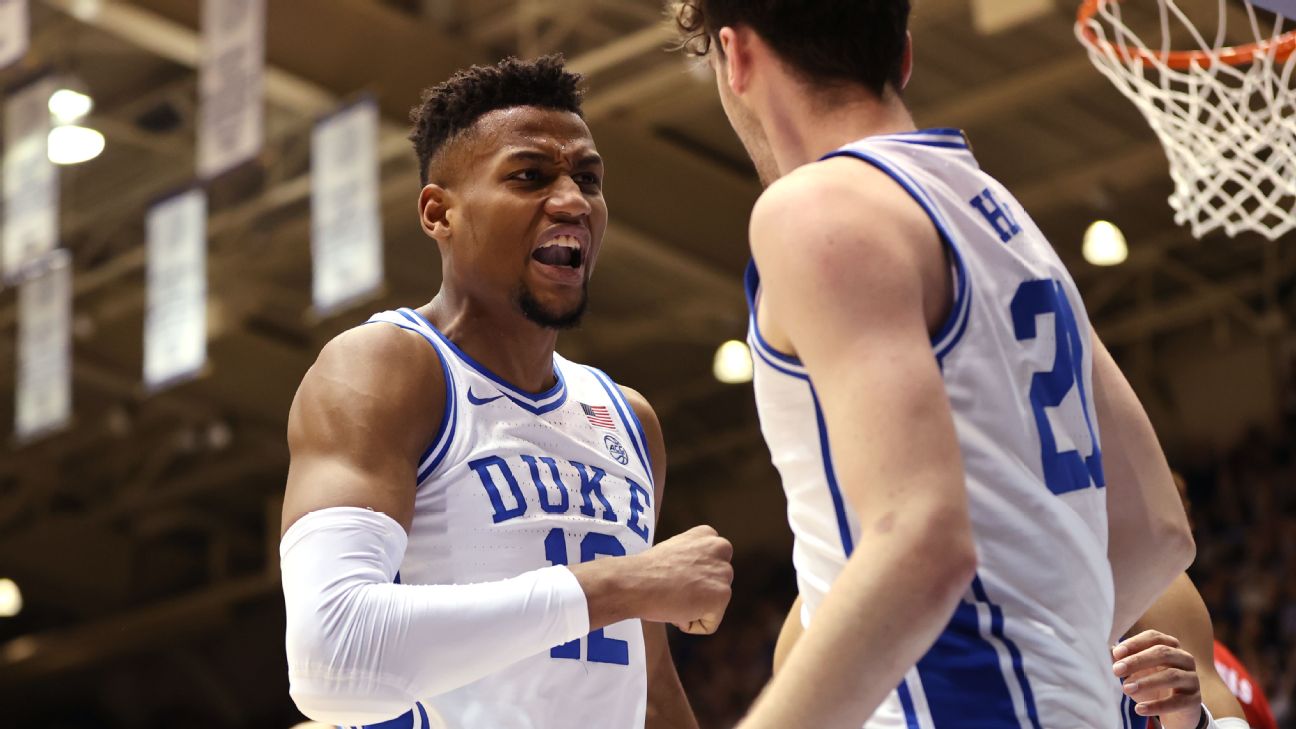 Remember February? A month ago, it seemed as if we all knew what to expect in the coming weeks. The contenders have separated themselves, and finally, college basketball had started to make sense.

That's what we thought, at least.

The past month of college basketball has rearranged the hierarchy of the sport and offered a great setup for the NCAA tournament and the chaos that will unfold over the next month.

Think you know what to expect? Well, let's first take a good look at the things that have changed from a month ago.

What we thought a month ago: Duke's worst days are behind it.

What we think now: Duke has really struggled in recent weeks.

Our take: The best thing about analytics in college basketball is they allow us to examine how a team is playing in the moment, which is especially significant in a season that might reward the most momentous team in Atlanta next month. After a 1-3 slide, Duke entered Monday's win over NC State ranked sixth in the NET and fifth on KenPom.com. But the Blue Devils have been ranked 61st overall in efficiency since Feb. 19, when the slide began with a loss at NC State, and they connected on just 43% of their shots inside the arc and 30% of their 3-point attempts, according to barttorvik.com data. Yes, it's a snapshot that might not define the team's season. But it's also a funk Duke has to shake before the NCAA tournament.

Then: Kansas is the best team in America, assuming the Jayhawks stay healthy.

Now: KU's win over K-State on Saturday gave us a glimpse of the Jayhawks' limited depth, even though they're still the best team in America.

Our take: Kansas fans around the world gasped when Udoka Azubuike left the first half of Saturday's 62-58 win at Kansas State with an ankle injury. He returned to play in the second half, but he clearly was limited. After the game, Bill Self said he expected Azubuike to avoid any long-term challenges. A day later, however, Self told reporters the Kansas star is "questionable" for this week's matchup against TCU. Kansas State entered Saturday's game ranked 101st on KenPom.com, but the Wildcats were down by just three points after DaJuan Gordon's 3-pointer with 27 seconds to play. Devon Dotson (25 points), who wrestled with a hip injury in January, saved his team. But the game also offered a glimpse of KU's reliance on Azubuike and Dotson, both of whom have dealt with injuries in recent months. Kansas should be the favorite to win the national title. If anything stops the Jayhawks in March/April, it might be the team's limited options behind Dotson and Azubuike. They're both Wooden Award candidates. A struggling Kansas State team kept pace with the Jayhawks when one of them struggled due to injury.

Then: Kentucky is a good team but might lack the star power to make a run.

Now: Immanuel Quickley is the SEC player of the year and the leader for a national title contender.

Our take: Kentucky continues to play some of the best -- and most consistent -- basketball in the country. A month ago, the Wildcats seemed to possess potential. It was clear then that if Nick Richards, Ashton Hagans and Tyrese Maxey could excel together, then Kentucky (12-1 in its past 13 games) would have a shot at making another run in the NCAA tournament. But the giant leap Immanuel Quickley has made over the past month has changed the fortunes of this Kentucky squad. He has kicked in the door to the SEC player of the year race and positioned himself to win the honor. He has made 47% of his 3-pointers and 92% of his free throw attempts in SEC play. The team has averaged 107 points per 100 possessions with Quickley on the floor and just 87 points per 100 possessions without him since Feb. 1, per hooplens.com data.

Then: Wisconsin could miss the NCAA tournament.

Now: Wisconsin might be the NCAA tournament sleeper to watch.

Our take: Few teams have endured the challenges Greg Gard has encountered throughout the 2019-20 season. Last summer, assistant Howard Moore was injured in a tragic accident that took the lives of his wife and daughter. The team got off to a rocky, 5-5 start in its first 10 Big Ten games and had not put together the résumé of a surefire NCAA tournament team as it entered February. That messy stretch culminated with Kobe King's decision to transfer and the removal of the team's strength coach following his use of a racial slur. Things looked bad for Gard and Wisconsin. But Frank Sinatra once said, "The best is yet to come," and that's been the theme for the Badgers since early February. They've won six in a row and, at 12-6 in Big Ten play, entered the week with a chance to win a slice of the conference title.

Then: There's still a chance for Memphis to improve.

Now: It has gone from bad to worse for head coach Penny Hardaway.

Our take: A month ago, Memphis was in the middle of a 5-2 stretch. And the Tigers, who have been a top-10 defensive team nationally, had finally enjoyed a slight surge that included a three-game winning streak. But the loss of D.J. Jeffries to a knee injury -- the team made announced on Feb. 1 -- for up to six weeks came at a bad time. The team is 3-4 since Feb. 8, and the Tigers entered the week among Joe Lunardi's "Next Four Out." Sure, the James Wiseman departure changed the course of the season. But this season features one of the softest bubbles in recent history, which makes Memphis' struggles to crack the field of 68 a bad look for Hardaway and his program, considering the young talent on the roster.

Then: Rutgers is ready to bust up brackets.

Now: The bandwagon, for the moment, is stuck in a ditch.

Our take: No matter what happens the rest of the way, Rutgers should be proud. A year after finishing 14-17 in the Big Ten, the Scarlet Knights started 7-3 in Big Ten play this year and looked like serious sleepers in the league. With wins over Seton Hall, Wisconsin, Stephen F. Austin and Penn State, they had also put together a résumé worthy of an at-large bid, which could lead to the program's first NCAA tournament invite since 1991. That mission has taken a hit, however, since early February. Steve Pikiell's squad is just 2-6 in its past eight games. That slide could make the team's Selection Sunday a bit more dramatic if it continues.

Then: Maybe Year 2 will be better for coach Mick Cronin.

Our take: On Jan. 26, UCLA lost at Oregon by 21 points after committing 23 turnovers. At the time, UCLA was 10-10 overall and 3-4 in the Pac-12. "To go on the road against the 12th-ranked team in the country, [with the] best point guard in the country and turn it over 23 times, you've got no chance," Mick Cronin said after the loss. That squad didn't even look like an NIT team. But UCLA entered this week atop the Pac-12 standings. Cronin is certainly the Pac-12 coach of the year, and his Bruins are now chasing a spot in the NCAA tournament. What? They have been 24th in adjusted offensive efficiency since that loss with a nucleus anchored by Chris Smith (13.1 points per game) and Tyger Campbell (8.2 PPG, 5.0 APG). This is a team on the rise. And if the Bruins earn a spot in the NCAA tournament, they could ruin brackets.

Then: Don't worry, the NET will soon make sense.

Now: Some weird things are still happening with the NET.

Our take: Listen, the NET is a good thing. It's a more accurate barometer of the college basketball landscape than the RPI. It gives teams more credit for winning tough games outside their home floors. Overall, it has helped college basketball. With a large sample size at this point in the season, significant movement for any team is rare. But that doesn't mean everything that happens with the rankings is perfect. On Saturday, Arizona lost to UCLA 69-64 and still moved up a spot, from 11th to 10th, in the NET rankings. Arizona has lost three consecutive games, yet it's still ranked ahead of Seton Hall (12th) and Kentucky (14th). Wisconsin's two-point win over Minnesota on Sunday was the team's sixth consecutive win. The NET rankings rewarded the Badgers by dropping them three spots in their rankings (from 27th to 30th). We just think that's interesting. 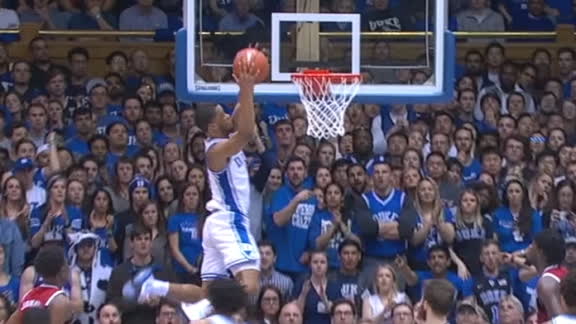 Jones lobs to Stanley for fast break slam
Tre Jones throws up an alley-oop to Cassius Stanley who throws down a two-handed jam to cap the Duke fast break. 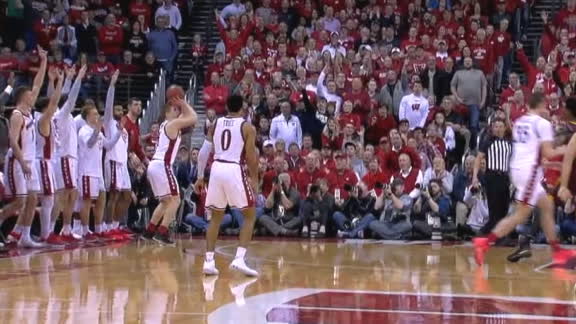 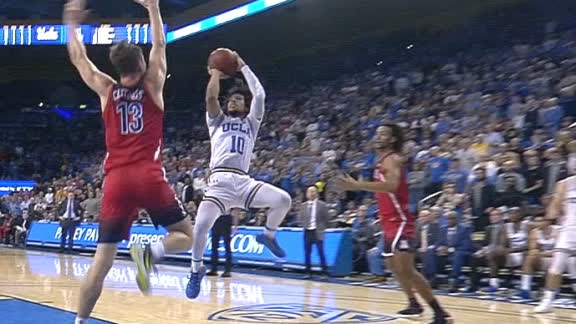