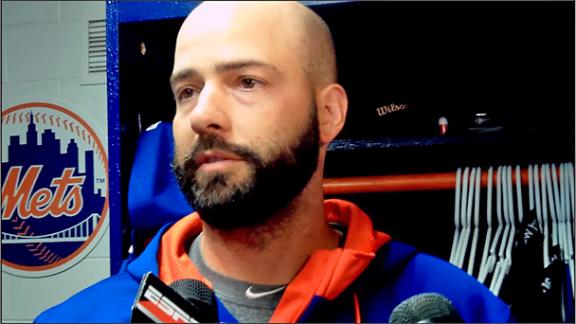 PORT ST. LUCIE, Fla. -- New York Mets right-hander Zack Wheeler will undergo Tommy John surgery next week and expects to be out of major league games through the first two months of next season.

Wheeler said he had an ominous feeling when chief operating officer Jeff Wilpon summoned him in the clubhouse Monday morning for a conference call with team doctor David Altchek.

Altchek told Wheeler that he had a fully torn ulnar collateral ligament in his pitching elbow.

Wheeler said he "cried a little bit" when he returned to the clubhouse and told teammates: "Torn UCL."

"When Jeff Wilpon came and got me, I sort of knew," Wheeler said. "I was like, 'Oh, man, it feels like I'm getting taken into the principal's office.' I sort of had a feeling that it wasn't good then. ... They told me on the phone, and I came out here and everybody was just sort of staring at me in this corner."

Wheeler visited Altchek in New York on Wednesday for a consultation, then met with renowned orthopedist Dr. James Andrews the next day. He elected to have Altchek perform the surgery next Tuesday or Wednesday rather than Andrews because of Altchek's success rate with Mets pitchers.

Wheeler estimated a 14-month rehab period, so he does not foresee returning to the majors before June 1, 2016.

"Of course I'm nervous about it, but you've got to do it and have that mindset when you're coming back that you're going to be 100 percent and better than you were before," Wheeler said. "... I knew it probably eventually was going to happen. You aren't meant to throw overhand and throw hard."

Miami Marlins ace Jose Fernandez, who is in the final months of his rehab from Tommy John surgery, is among the major leaguers who already have reached out to Wheeler, although the two have yet to speak.

Wheeler acknowledged he pitched with significant pain at points last season, but he was performing at a high level and was never tempted to miss a start. During last season, doctors diagnosed him as merely suffering from elbow tendinitis.

Wheeler said it wasn't until offseason MRIs, particularly one in January that was independently reviewed by a doctor in California, that he learned he had a partially torn tendon attached to a bony deposit in the elbow.

He said it was senseless at that point to undergo surgery to remove the bony deposit and repair the tendon because the recovery time would have been four to six months and would have compromised much of his 2015 season. So he underwent platelet-rich-plasma therapy and resolved to pitch through the same discomfort as last season.

No one had any inkling of a UCL tear until an MRI taken last weekend, Wheeler insisted.

Wheeler believes the ligament tear was inevitable because of how hard he throws and was unrelated to the calcium deposit and tendon issue. That bony deposit was not grating on the UCL, he asserted. The tendon issue existed from early in Wheeler's career, doctors believe, and resulted in the calcium accumulation. Last year's intensified pain, Wheeler believes, was the tendon beginning to pull away from the bony growth.

"Honestly, I've had pain in that spot in my elbow since I got drafted -- since before I got drafted," Wheeler said. "It just happened to really flare up and be a little more painful last year, but not enough to where I was actually like, 'Oh my gosh.'"

Wheeler said the difference this spring training was an inability to recover from that pain in time for his next start.

Wheeler, like his agent B.B. Abbott days earlier, absolved the Mets of mishandling him last season, when he went 11-11 with a 3.54 ERA in 185 1/3 innings spanning 32 starts. He said the pain got progressively worse after an Aug. 15 start against the Chicago Cubs when he threw a lot of curveballs and sliders, but he was still pitching effectively.

Including minor leaguers, Wheeler's Tommy John surgery will be the 25th performed on a Met since 2005, the third-most of any organization, according to ESPN Stats & Information. The Atlanta Braves have had 30 and the Texas Rangers 28. Wheeler would be the 10th with the Mets since June 2013.

"I can't complain about how the Mets handled me last year inningswise," Wheeler said. "I don't have any complaints at all about how they handled me."

Next week's surgery, in addition to replacing the ligament, also will repair the long-damaged tendon and remove the calcium deposit.

"They're going to go in and basically clean up everything," Wheeler said. "So I'm going to have a new elbow when I come out."

Right-hander Dillon Gee is expected to take Wheeler's rotation spot, although pitching coach Dan Warthen has not fully ruled out prospect Rafael Montero. The Mets also will have a safety net at Triple-A Las Vegas with top prospects Noah Syndergaard and Steven Matz.

"I think we have plenty of guys that can come in and take my spot and do well," Wheeler said.