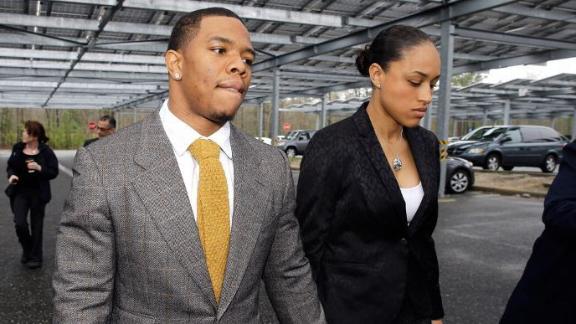 A day after a new video surfaced showing Ray Rice hitting his then-fiance in the face in a hotel elevator, prompting the Baltimore Ravens to release the running back and the NFL to increase his suspension from two games to indefinite, Janay Rice defended her husband and criticized the media.

"I woke up this morning feeling like I had a horrible nightmare, feeling like I'm mourning the death of my closest friend," she wrote in an Instagram post. "But to have to accept the fact that it's reality is a nightmare itself. No one knows the pain that the media & unwanted [opinions] from the public has caused my family. To make us relive a moment in our lives that we regret everyday is a horrible thing.

"To take something away from the man I love that he has worked his ass off for all his life just to gain ratings is horrific. THIS IS OUR LIFE! What don't you all get. If your intentions were to hurt us, embarrass us, make us feel alone, take all happiness away, you've succeeded on so many levels. Just know we will continue to grow & show the world what real love is! Ravensnation we love you!"

ESPN's Josina Anderson spoke to the Rices by phone Tuesday. Asked how he was doing, Ray Rice responded, "I have to be strong for my wife. She is so strong. ... We are in good spirits. We have a lot of people praying for us and we 'll continue to support each other."

Rice added, "I have to be there for [Janay] and my family right now and work through this."

After that, Ray handed his phone to his wife. "I love my husband. I support him," Janay Rice said. "I want people to respect our privacy in this family matter."

TMZ Sports released the video that showed Rice assaulting his wife on its website Monday. Earlier Tuesday TMZ reported that sources connected with the Revel Hotel and Casino in Atlantic City told TMZ Sports no one from the NFL asked the casino for the video of the couple in the elevator from the Feb. 15 incident. Instead, the league apparently relied on previously released video that showed Rice dragging his fiance -- who is seemingly unconscious -- from the elevator before determining that he would serve a two-game suspension. The penalty was levied in July.

The Ravens said Monday that they'd not seen the video released Monday by TMZ Sports, either. Asked why the team wasn't able to view the video sooner, coach John Harbaugh told reporters at a Monday night news conference: "I don't know why that would be a hard thing to understand. It wasn't available. It wasn't there for us. It wasn't something that we ever saw or had access to."

The Associated Press reported Monday night that it had viewed a higher-quality video provided by a law enforcement official, and that Rice and Palmer could be heard shouting obscenities at each other. According to the AP, after she collapses, he drags her out of the elevator and is met by some hotel staff. One of them can be heard saying, "She's drunk, right?" And then, "No cops." Rice doesn't respond.

The video, which is slightly longer than the TMZ version and includes some audio, was shown to the AP on condition of anonymity because the official isn't authorized to release it.

The NFL repeated Tuesday that authorities did not make available the video of the assault, despite a claim by TMZ.com that the league did not ask the hotel for it. In statements, the league said it had asked New Jersey State Police for it, and had "reached out multiple times to the Atlantic City Police Department and the Atlantic County prosecutor's office."

The Ravens reached their decision to release Rice in a quick meeting between Harbaugh, owner Steve Bisciotti, general manager Ozzie Newsome and team president Dick Cass, according to Harbaugh.

"The Baltimore Ravens terminated the contract of RB Ray Rice this afternoon," the team's statement read.

Bisciotti first saw the video on television and decided almost immediately that Rice had to be released, a source told ESPN's Ed Werder. Bisciotti called a meeting to confer with other members of the organization's hierarchy. Newsome called Rice to inform him of the team's decision. Harbaugh also spoke to Rice, while Bisciotti contacted NFL commissioner Roger Goodell.

The source said that Rice admitted to the Ravens from the start that he was guilty of striking Janay and, for the most part, accurately described what they eventually saw on the video. But the brutality of the assault when seen on the security video made a different impression.

"His description was not too much different -- except it looks more violent when you see it," a team source said. "He's a likable guy, and he's done so many things the right way in his career, but he's paying for what he did and the fact there was a video. You can't erase the video."

The source insisted the Ravens had requested copies of the video through multiple sources without success. At one point, a police officer who had seen the video described what it contained to Ravens officials.

"We hadn't seen the video," the source said. "The video changes the perspective."

The Ravens are not expected to further address the situation.

The NFL's two-game suspension of Rice was widely criticized at too lenient.

A spokesperson for the Atlantic County Prosecutor's Office told ESPN's Don Van Natta on Monday: "Mr. Rice received the same treatment in the court system that any first-time offender in similar circumstances has received. We have no comment beyond that."

Rice's lawyer, Michael Diamondstein, declined to comment when contacted by the AP.

Steelers quarterback Ben Roethlisberger, who, in 2010 was the first player suspended under the NFL's personal conduct policy, said Tuesday he would pray for Rice and his wife. The Steelers visit the Ravens on Thursday.

Rice, 27, was charged with felony aggravated assault in the case and in May was accepted into a pretrial intervention program that allowed him to avoid jail time and could lead to the charge being purged from his record. Rice hasn't spoken often to the media since his arrest, but on July 31 he called his actions "inexcusable" and said this is "something I have to live with the rest of my life."

On Monday, teams were notified that any contract with Rice would not be approved or take effect until further direction is provided by Goodell, a league source told ESPN NFL Insider Adam Schefter.

The executive director of the NFL Players Association, DeMaurice Smith, told SI.com that the video is disturbing and jarring.

"The video is really all the information I've seen. I did learn on the way over to the facility about Mr. Rice being released, and have not yet talked to [Goodell] about any other discipline," Smith said, according to the report. "I did hear that [Rice had been suspended], but I tend to rely on the commissioner and learning all the facts first-hand. That's what we'll do, and once we know what those facts are, that will dictate our next steps."

Information from ESPN NFL Insider Adam Schefter and The Associated Press is included in this report.

Janay Rice Defends Husband
Kate Fagan discusses Ray Rice's wife, Janay, who is adamantly defending him, and how the NFL has handled the domestic violence situation.

Rice: I Have To Be Strong For My Wife
Josina Anderson discusses the phone conversation she had with Ray Rice and his wife Janay.

Decision To Release Rice Was Unanimous
Ed Werder breaks down the Ravens' decision to release running back Ray Rice.

Harbaugh On Ravens' Decision To Cut Rice
Ravens coach John Harbaugh discusses the team's decision to cut RB Ray Rice after a video was released that appeared to show Rice striking his then-fiance.

John Clayton On Ray Rice's Release And Suspension
John Clayton joins Keith Olbermann to discuss today's developments in the Ray Rice story: the release of a new elevator video, the Ravens' termination of his contract and Roger Goodell's indefinite suspension of the running back.