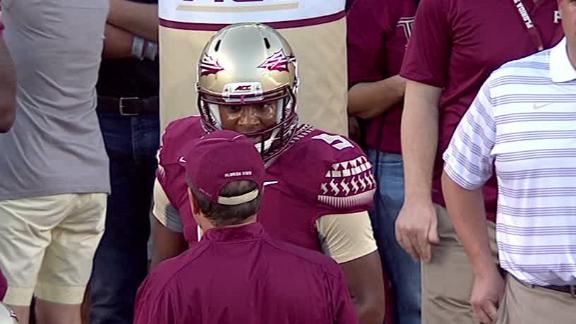 TALLAHASSEE, Fla. -- SuspendedFlorida Statequarterback Jameis Winston came out in full pads and his helmet and participated in warm-ups Saturday night before going back to the locker room and changing into street clothes.

Winston came out of the tunnel with the other quarterbacks and took snaps under center like normal. Shortly after, he spoke with coach Jimbo Fisher and went back into the locker room. Winston later reappeared wearing his jersey without pads, a ball cap and pants.

The Heisman Trophy winner was suspended for the game against No. 22Clemsonafter making "offensive and vulgar" comments about femaleanatomy Tuesday. The initial punishment was Winston to sit out the first half, but interim university president Garnett S. Stokes and athletic director Stan Wilcox announced the new suspension late Friday night.

The decision to extend the suspension was made because Winston was not entirely truthful or forthcoming regarding the incident, a source told ESPN.

The suspension came after several students tweeted Winston stood on campus and shouted an obscene phrase that may have derived from an Internet meme.

Sean Maguire started for Florida State.Sources told ESPN's Heather Cox that Winston was on the sideline "most importantly to help Sean Maguire."

Winston was very involved in this game despite being suspended. He spoke to players at halftime in the locker room and was standing on the sidelines cheering on players and talking to coaches.

ESPN's Tom Rinaldi and The Associated Press contributed to this report.