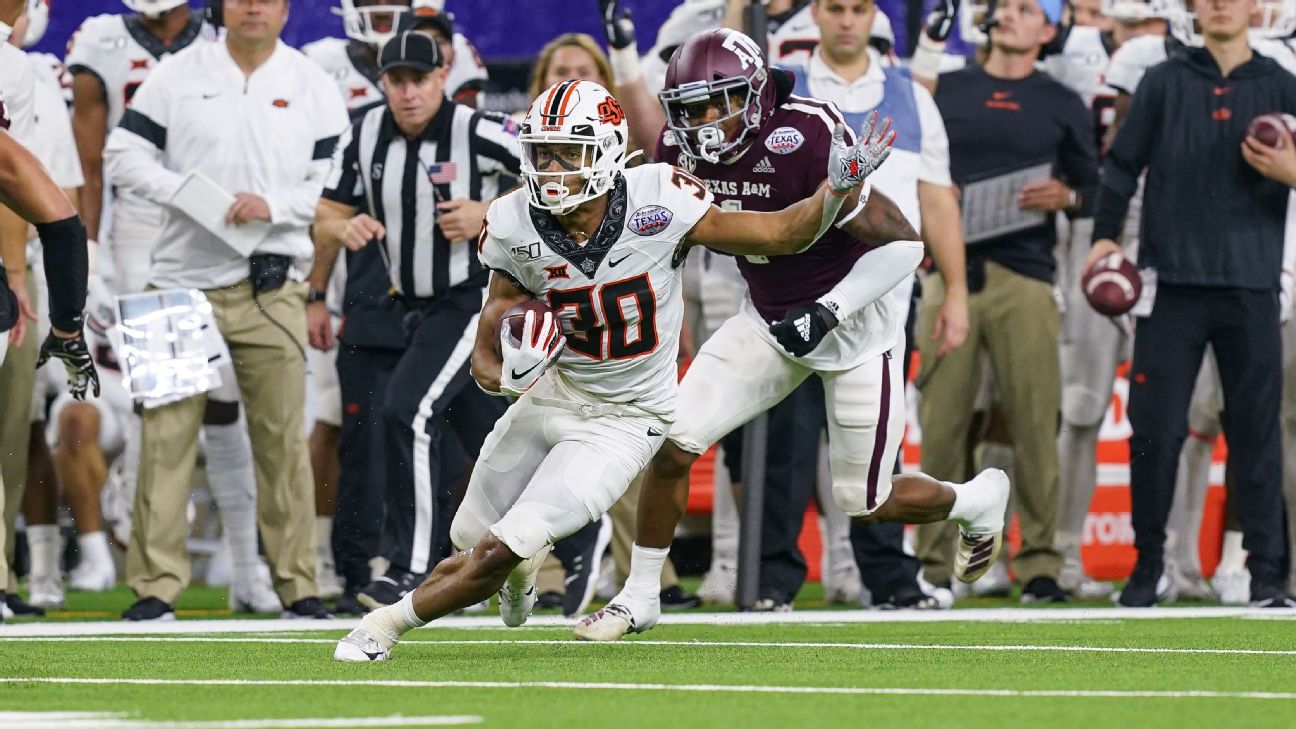 The decision by the Big Ten and Pac-12 to postpone football means we won't get to see Justin Fields rocketing touchdown passes at Ohio State or Micah Parsons terrorizing opposing offenses at Penn State this fall.

Neither will we be able to marvel at the tandem of Amon-Ra St. Brown and Tyler Vaughns at USC or watch in awe at the speed with which Kayvon Thibodeaux gets after quarterbacks at Oregon.


But not all is lost in terms of electrifying talents to watch this season. There are still plenty of playmakers to be found on both sides of the ball.

In anticipation of the season, we compiled a list of the 15 most exciting players participating in college football in 2020.

The qualifications are simple: If you can't take your eyes off them -- even if it's an offensive lineman -- they qualify.

1. Jaylen Waddle, WR/PR, Alabama: Waddle gets the slight edge here because of his versatility as a specialist. Over the past two seasons, he has more punt return yards (720) than anyone and is tied for the most punt return touchdowns (two) in college football. When he has the ball in open space, look out. Just look at the way he exposed a top-shelf Auburn defense last season, going off for 230 all-purpose yards and four touchdowns (three receiving, one kickoff return). Waddle's 12.3 yards after the catch average was best in the nation by a wide margin.

2. Travis Etienne, RB, Clemson: It's easy to take Etienne for granted after he ran roughshod over ACC defenses the past three seasons. But to do so would be a mistake. He's as complete and unstoppable a back as we've seen in quite some time. Not only has he broken more tackles (90) than any running back since 2017, he also has the most rushes of 20 or more yards (48) during that time.

3. Chuba Hubbard, RB, Oklahoma State: The Canadian Cowboy has been a revelation the past two seasons in Stillwater. Last season he truly shined, though, leading the country in total yards from scrimmage (2,292). But he wasn't just a volume runner; he had 49 rushes of 10 or more yards, which was far and away the most of any back in the Big 12.

4. Derek Stingley, CB, LSU: The unfortunate thing about a great cornerback is that he rarely gets tested. And while that's certainly true of Stingley -- Mississippi State didn't throw his way once last season -- you can't take your eyes off him because he's that talented. Freshmen aren't supposed to be consensus All-Americans and yet he was, having led the SEC and ranking second nationally in passes defended (21). The definition of stingy, quarterbacks had a QBR of 22.6 when throwing his way.


5. Tutu Atwell, WR, Louisville: Who cares that he's only 5-foot-9? The former dual-threat QB emerged as perhaps the most dynamic pass-catcher in the ACC last season as he led the conference in receiving yards (1,276) and ranked second touchdowns (12). He's in the conversation for the fastest player in college football, reportedly running a 4.27-second 40-yard-dash and averaging 10.73 yards after catch.

6. D'Eriq King, QB, Miami: Albeit undersized at 5-foot-11, King proved to be one of the most dynamic quarterbacks in the country prior to leaving Houston, scoring a whopping 78 touchdowns (50 passing, 28 rushing). In 2018, despite missing two games, he set a single-season American Athletic Conference record for touchdowns (50).

7. George Pickens, WR, Georgia: The freshman started with a bang last season with a touchdown and a diving 43-yard grab against Murray State, looking like the next A.J. Green. Whether it was his toe-tap catch against Arkansas State or his leaping, corkscrew touchdown against Missouri, Pickens showed that he's a highlight waiting to happen.

8. Zac Thomas, QB, Appalachian State: With 40% of the Power 5 sitting out the fall, get ready to enjoy some talented Group of 5 quarterbacks. Thomas might be the best of them. Despite standing 6-foot-1, he's a physical runner who is skilled at throwing outside the pocket. Last season, he tossed 28 touchdowns and rushed for seven more scores.

9. Anthony Schwartz, WR, Auburn: The junior is literally a world-class sprinter, having set a world youth record in the 100-meter dash in 2017. And his speed definitely translates to the football field, where he can outrun anyone. Just ask Texas A&M and the trail of defenders he left in his wake in 2019. Despite dealing with an injured thumb, he finished the season with 440 yards receiving and 118 yards rushing, averaging 10.7 yards per touch.

10. Chris Rumph, edge, Duke: Every once in a while you get an edge rusher who is must-see TV, and Rumph certainly fits that bill. His numbers are staggering, and not just the 6.5 sacks and 13.5 tackles for loss. Those came in limited playing time and tell only half the story. Most important is that he pressured the quarterback on 22.1% of his pass rushes, which was well ahead of Ohio State star Chase Young.

11. Joshua Youngblood, WR/KR, Kansas State: Leading the country in kickoff return touchdowns (3) as a true freshman was a great start. But that's only one facet of his game. The former high school quarterback was still learning to play receiver last season, catching the occasional pass or fly sweep. With experience will come more involvement on offense.


12. Chazz Surratt, LB, North Carolina: Not often does a quarterback become a linebacker. Rarer still is one who does it and then dominates the way Surratt did last season, ranking second in the ACC with 115 tackles and seventh among Power 5 players with 31 total pressures. After cross-training this offseason as an edge rusher, don't be surprised if Surratt makes an even bigger impact as a senior.

13.Kadarius Toney, WR/RB, Florida:He's listed on the Gators' official depth chart as an athlete for a reason, having played wide receiver, running back and wildcat QB. And in Gainesville that kind of versatility will inevitably draw comparisons to former great Percy Harvin. While Toney's overall numbers don't put him in the same league as Harvin -- injuries have been a problem throughout his career -- no one doubts his potential. In 27 games, Toney's had 97 touches, averaging 10.57 yards every time he gets the ball. If he can stay healthy he could put up monster numbers this season.

14. Samuel Cosmi, OT, Texas: We have to show some love to the big fellas. Dominance comes in all forms, you know. According to Pro Football Focus data, Cosmi allowed a pressure rate of only 2.5% last season. But what has us really excited is the athleticism this 300-pounder showed finding the end zone against West Virginia.

15. Arik Gilbert, TE, LSU: We're going out on a limb spotlighting a true freshman, but the buzz keeps building for the former Gatorade Player of the Year, who comes in at 6-foot-5 and 249 pounds. Senior defensive back JaCoby Stevens said the Tigers have taken to calling him Megatron. Gilbert has the size and strength to be a Day 1 starter at tight end and the speed that has the coaching staff considering how often to use him at wide receiver. 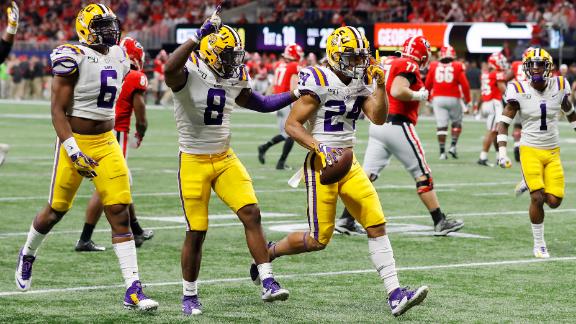 Stingley has tools to be best in LSU history
SEC Now's Marcus Spears says freshman Derek Stingley Jr. has the chance to leave LSU as the best cornerback in program history. 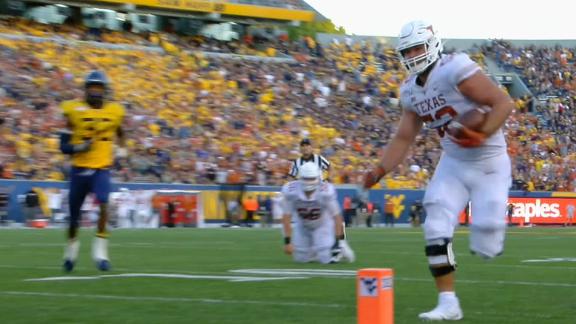