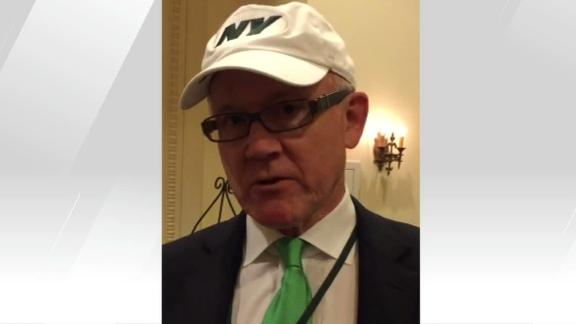 "Come back to the Jets," Johnson said at the NFL owners meetings, sounding almost like a college recruiter.

Team officials have showered Fitzpatrick with praise in recent weeks, but the two sides remain far apart on a new contract. The Jets are offering about $7 million per year, sources said, while Fitzpatrick is thought to be seeking twice that amount.

Johnson said he is optimistic a deal can be reached.

"I kind of hope so because he had such a good year last year," he said of Fitzpatrick, who set the franchise record with 31 touchdown passes last season. "I mean, it seems like an ideal [situation].

Johnson said he's not surprised negotiations have lasted this long, adding that it's part of the free-agency process. He said there's no sense of urgency, hinting that Fitzpatrick could afford to miss the offseason program because he has such a grasp of Chan Gailey's offense.

Ideally, the Jets don't want the standoff to last that long. At some point, their fallback options could sign elsewhere.

Robert Griffin III, who visited the Jets last week, also has drawn interest from the quarterback-needy Cleveland Browns. Johnson said the Jets were "very impressed" with RG III as a person, although it doesn't appear that the Jets have strong interest in the former Redskins quarterback.

The in-house options are former starter Geno Smith and the inexperienced Bryce Petty. General manager Mike Maccagnan said Smith is a "definite possibility" as a replacement.

Johnson declined to discuss the Jets' contingency plan, suggesting they won't act out of desperation if Fitzpatrick leaves. He noted that not every championship team needs an elite quarterback, mentioning the Denver Broncos, whose strong defense allowed them to overcome a diminished Peyton Manning.

"How did they win last year? A good D, baby," Johnson said. "How 'bout that Von Miller? How'd you like a guy like that? There's only one Von Miller."

The Jets' search for a franchise quarterback has lasted for decades. Johnson lamented the failures of his previous scouting department.

"We could've drafted Russell Wilson in the second round [in 2012]," he said. "We've had shots at players, but we didn't take those. Hopefully, we're getting better at evaluating talent, particularly at quarterback."

Johnson on Fitzpatrick: Hope we can come to an agreement
Jets owner Woody Johnson says they are in talks with QB Ryan Fitzpatrick's agent and hope they could come up with an agreement that both sides are happy with.