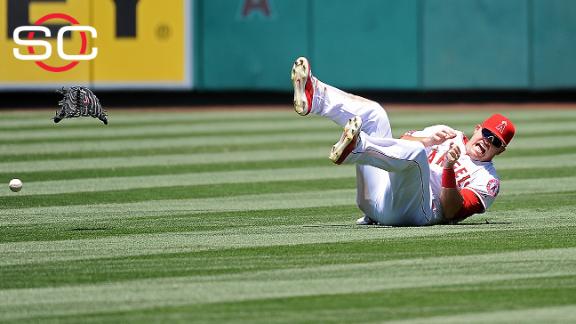 HOUSTON -- An MRI exam on the injured left wrist ofLos Angeles Angels star Mike Troutdid not show any serious issues Tuesday, and he was upbeat he would return on Wednesday after missing a10-5 loss to the Astros.

Trout was hurt Sunday attempting to make a diving catch in center field in the fourth inning, but he stayed in the game and later hit a grand slam.

"I'm just hoping to come in, and hopefully it feels all right," Trout said to reporters after Tuesday's loss. "Obviously, I don't want to make it worse."

Manager Mike Scioscia said Trout could indeed be back in the lineup Wednesday after being held out as a precaution before it was learned the MRI showed the wrist was free of structural damage.

A four-time All-Star and the reigning AL MVP, Trout leads the majors with 31 homers and is hitting .315 with 64 RBIs.

"The MRI was probably the best it could be," Trout said. "I have to take the positive from that."

Trout took batting-cage swings Tuesday before it was determined he wouldn't play.

"The initial impact of the swing is where it bothered me," he said.

"I'm not sure how much time Trout is going to need," Stoneman said. "He's got a little strain. He's day to day, so hopefully he won't miss a whole lot of time, but if he happens to, maybe one of these guys could be the one that fills in for him."

Tuesday was the first game of a three-game series between the top teams in the AL West. With the loss, Los Angeles fell into a tie for first in the division with Houston.

Backup Daniel Robertsonstarted at center fieldin Trout's absence, going 0 for 4 from the No. 9 hole.

Shane Victorinomade his debut in left field after a trade from Boston on Monday. He singled to start the second and scored on a single by Angels third basemanConor Gillaspie.Kole Calhounplayed in right, going 1 for 5 with a single.

Trout's change in status came as the Angels announced several other moves Tuesday.

Joyce's move to the DL was retroactive to Monday. He lost consciousness when Aybar's knee hit Joyce's chin while they chased a popup in shallow left field in the fourth inning of the Angels' 13-7 victory.

Joyce is batting .178 with five homers and 21 RBIs in a dismal first season with Los Angeles.

To make room for Murphy and DeJesus, respectively, the team designated right-handers Vinnie Pestano and Jeremy McBryde for assignment.