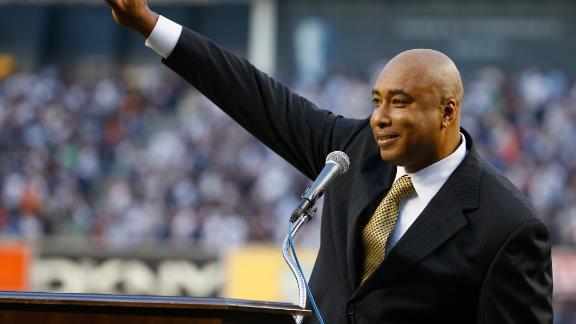 NEW YORK -- The Yankees honored Bernie Williams prior to Sunday night's 5-2 loss to the Texas Rangers, officially retiring his No. 51 and unveiling his plaque that will reside in Monument Park at Yankee Stadium.

Williams was a key contributor as the Yankees' center fielder for World Series-winning teams in 1996, 1998, 1999 and 2000, and many of his former teammates were on hand for the ceremony, including Derek Jeter.

It was Jeter's first appearance at Yankee Stadium since he retired at the end of last season.

"This is unbelievable," Williams said, beginning his remarks to the crowd. "Never in my wildest dreams would I have thought that a skinny little 17-year-old kid from Puerto Rico could be here this day, in this celebration. I am overwhelmed."

Williams spent his entire 16-year career with the Yankees, beginning in 1991. He made five American League All-Star teams, won four Gold Gloves, has the most postseason RBIs in MLB history (80) and the second-most postseason home runs (22). He played his final season in 2006, but did not officially retire until last month.

He tried to explain that gap, and have a little fun with it, later on in his speech.

"The Yankees organization has been on me for years to have this day," Williams said. "And I have been putting it off for many years, cause I didn't think it was that important. It took nine years, and I really wanted to make sure that I was not gonna come back.

"And a month ago, they made me sign a minor league deal, and I spent a minute and a half thinking, feeling what it was like to be a major league baseball player again. And then about a minute and a half after, I signed my retirement papers. I guess they wanted to make sure that I was not gonna play for any other team. But I promise that, five or 10 years from now, if I decide to come back, I will only play for the Yankees."

That led to one of the biggest cheers of the evening.

Speaking with the media after the ceremony, Williams admitted being nervous beforehand.

"I've been thinking about this day for a while," Williams said. "Coming to the field, to me it reminded me of going to a playoff game. I started feeling the butterflies in my stomach, almost the way I felt coming to play in a really important game.

"It brought me back. It was good to have that kind of set of emotions running in my head as I was coming to the stadium. It felt great. This is a great day, one of the greatest days obviously in my career and top days in my life."

Williams' No. 51 is the eighteenth number the Yankees have retired, and it will not be the last. The team will be giving the same honor to Pettitte and Posada later this season, and Jeter's No. 2 will undoubtedly be retired as well.

Jeter did not speak to the media Sunday, but Williams said he thinks Jeter is handling his first year of retirement quite well.

"I think he's very at peace with where he is right now in his life," Williams said, "and I am so happy for him."