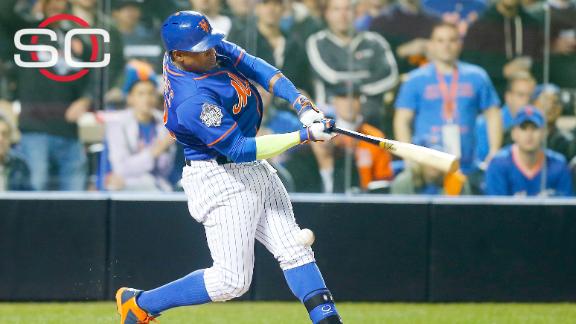 Cespedes, 30, agreed to a deal with the Mets on Friday night, according to ESPN's Jim Bowden and media reports, a move that takes the last big bat off the free-agent market.

The deal, pending a physical, is for three years and $75 million, including $27.5 million in the first year, after which he can opt out.

A right-handed-hitting outfielder from Cuba, Cespedes is coming off a career year, which started with the Detroit Tigers before he was traded to the Mets just minutes before the trade deadline. He set career highs in a number of power categories, including home runs (35), RBIs (105) and OPS (.870). His power was on full display with New York, for whom he hit 17 home runs in 57 games, including nine in a 13-game stretch to start the month of September, reviving an offense that had ranked last in the majors in most categories upon his arrival in late July.

Cespedes was slowed during the postseason by a left shoulder injury that required a cortisone injection before the World Series. He departed the final game of the World Series after fouling a pitch off his left knee.

"He works very hard to be a good teammate," Collins said. "Even though he doesn't speak a lot of English, he works very, very hard at it.

"His pregame routine is off the charts ... off the charts. He has things that he does right before a game in the batting cage. ... When he walks onto that field, he's legit.

The Nationals reportedly made a five-year offer to Cespedes, a 2014 All-Star and a 2015 Gold Glove winner. The Baltimore Orioles also had interest in Cespedes, offering him a contract before re-signing slugger Chris Davis last week.

A baseball source familiar with Cespedes' contract negotiations previously told ESPN that Cespedes had been seeking a six-year deal in the $22 million annual range this winter.

The Mets, who had expected for much of the offseason to be moving on from Cespedes, now have a glut of outfielders. Curtis Granderson, Michael Conforto, Alejandro De Aza and Juan Lagares also are signed for 2016.

Cespedes' addition raises the team's payroll in 2016 to roughly $140 million, its highest level since Omar Minaya's days as general manager.

It took Major League Baseball and the players' union acting in September to allow the Mets to negotiate with Cespedes this winter. Because Cespedes' contract called for him to be a free agent two years before players generally are eligible, the Mets technically had to release him after the postseason. By rule, that made the Mets ineligible to re-sign him. But after Cespedes' side approached the Mets, MLB and the players' union agreed to waive the rule, allowing them to be one of his suitors.