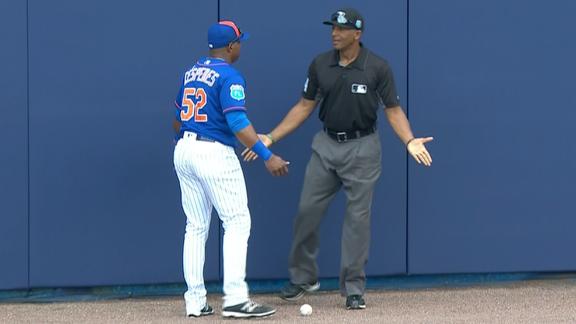 When the New York Metsdecided to moveYoenis Cespedesfrom left field to center with right-handed opponents slated to start, they hoped to exploit the keen decision-making, arm strength and speed he has displayed in becoming one of the best highlight-making outfielders in the big leagues.

Cespedes' choice to stare at a ball wedged into the bottom of the outfield wall in a spring training game despite knowing he could retrieve it -- " 'Yes, I guess I could grab it,' " he said he thought -- didn't seem to worry the Mets on Thursday.

"He thought it got stuck,'' Mets manager Terry Collins said. "The umpire [C.B. Bucknor] went out and swiped the ball and said it wasn't stuck. It's one of those things we could talk about a ground rule, [but] we don't talk about that much in spring training. ... It was just a misunderstanding more than anything."

In the bizarre second-inning play, Cespedes backed away from a ball that was in plain sight underneath the padding on the wall, giving the Houston Astros an inside-the-park homer in an 8-5 Grapefruit League win.

"The ball fell under the fence," Cespedes said through an interpreter. "It got wedged in there. For me, I couldn't grab that. I thought that should have followed the ground rule and should have just been the double."

A.J. Reedhit the deep drive that landed in the dirt at the base of the wall. The ball was clearly visible, but Cespedes put up his hands to signal it was unplayable and should be a ground-rule double. Reed easily made it to second base, then jogged the rest of the way home while Cespedes stood by.

Bucknor went out to center field and rolled the ball away from the wall, showing Cespedes he should have made a play.

Cespedes played center field in Cuba, but mostly had shifted to left field in the majors until being acquired by the Mets last July 31.

When the Mets face a right-handed starting pitcher this season and Michael Conforto and Curtis Granderson also are in the outfield, Cespedes is expected to continue to play center field. He figures to shift to left when the Mets face a southpaw and Juan Lagares enters the lineup, although Collins recently has experimented with Lagares in left and Cespedes in center.

"I don't know if A.J. knew what was going on," Keuchel said, according to the New York Post. "It happens more times than [you'd] think. You've got to keep running. It was a judgment call. [The umpire] said he could have got it."

Information from The Associated Press and ESPN's Adam Rubin was used in this report.