Lush greenways are being mowed by crews. Flags are gently pushed next to each hole, and quaint bridges take fellow golfers over gently-flowing streams.

It's a far cry from the rough terrain Peyton has navigated in the past as Kurdish liaison officer for the 18th Airborne Corps at Fort Bragg.

"I was injured in a vehicle rollover in Northern Iraq," the former Army captain explained, describing a 2011 incident. "We were in a high-speed combat mission and my driver lost control of the vehicle."

"Next thing I knew my hand was severely injured and they were medevacking me to Landstuhl, Germany," Peyton said.

Doctors were able to avoid amputating Peyton's right hand. Today, it's functional, but during his two-year recovery at Walter Reed National Military Medical Center Peyton connected with other veterans who loved golf and he found his calling.

In 2014, Peyton created the Moore County-based Veterans Golf Association, which serves as a connection place for combat veterans of all generations and their families. 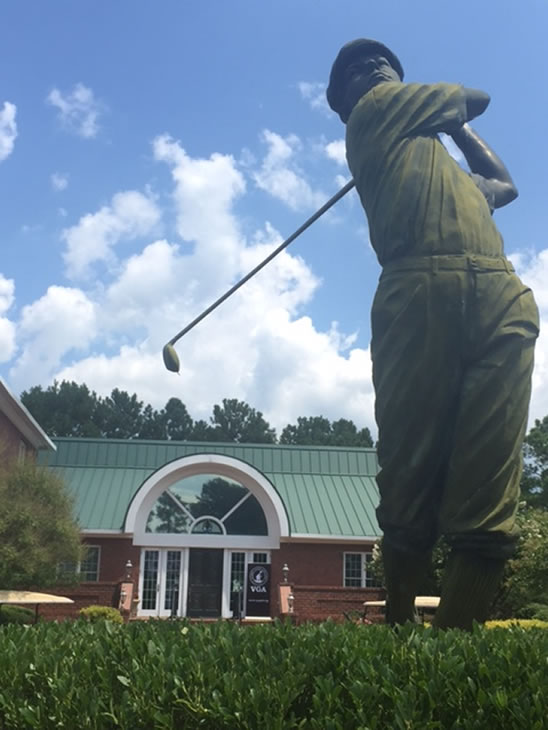 Saturday's North Carolina tournament is one of eight qualifiers leading up to a Veterans Day competition at Pinehurst.

On average, 1,200 veterans compete in each qualifier and 80 advance to Pinehurst in an all-expenses-paid trip. Ten winners - five wounded warriors and five other veterans - make their way to the final competition from Anderson Creek.

"It is the mecca of all golf," said Peyton. "It is a bucket list item for most people who get to play it, and it will be a special experience for those 80 vets who make it past their qualifier."

"Being a veteran of multiple tours in combat, it's nice to hang around other people I can share with," said John Martie, an officer stationed at Fort Bragg who will compete this weekend. "To share stories with, hear their stories....If nothing else be with one another outside a work environment with those who are still in (the service), and those who aren't."

Martie, who has served in five combat tours during his 13 year Army career, agreed the VGA is about more than golf.

"As conflicts draw down, or maybe new conflicts start the veteran population is not going anywhere," said Martie. "And there needs to be some sort of outlet for that, and I see this as the perfect outlet."

For more information about the Veterans Golf Association, visit www.vgagolf.org.