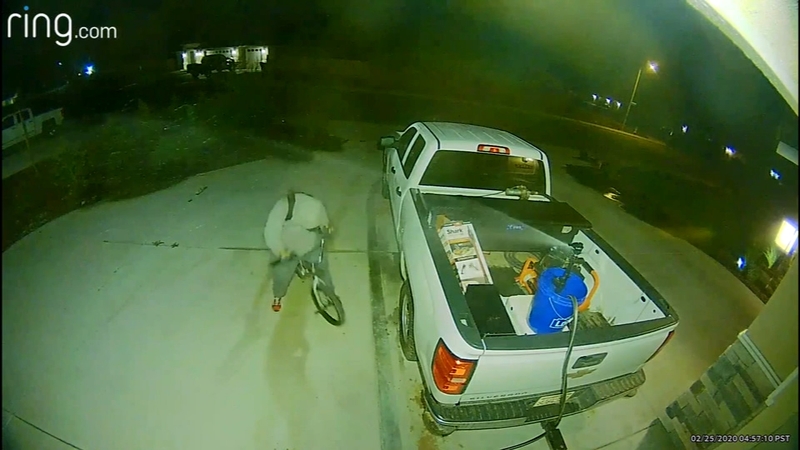 PORTERVILLE, Calif. -- You often hear about people using motion sensors, floodlights and alarms to fight off thieves, but one Porterville, California family took it a step further to get the crooks to step away.

Water - that is how homeowner Josh Camerena fought off an alleged thief.

Over the past year he has dealt with prowlers targeting his Porterville neighborhood.

"Someone has come and tried to look in my truck. They tried to pop our lock on the side gate to get in our backyard," says Camarena.

At that point, Camerena and his wife decided to install a Ring camera, hoping it would stop the problem.

"We thought the light itself would scare them away," he says.

But that security trick was not successful.

The crooks were still returning.

So Camerena's wife turned to the internet, and found a unique gadget that sprays water at anything in its line of sight.

"The brand is called Orbit Yard Enforcer. It's more (meant for) animals, like keeping animals out of your yard," he says.

Within days it was delivered and Camerena quickly pieced it together, placing it inside a bucket filled with pea-sized gravel.

The sensor was working properly on Monday morning at 4:57 when a man rolled up on his bike and got his sticky fingers wet.

"From that point throughout the whole morning, I couldn't stop laughing, we both were laughing about it, it was pretty awesome," says Camarena.

Porterville Police say a number of neighborhoods have experienced thieves targeting vehicles and other property while people are sleeping.

"Never leave anything of value in your vehicle number one. If your vehicle is parked outside, make sure it's locked. A lot of people we ask that they also call and let us know because then we know to focus our patrols at," says Porterville Police Lt. Brian Nix.

But for now, Camarena is going to bed with peace of mind, because he has a $70 contraption that is armed... and ready to spray.